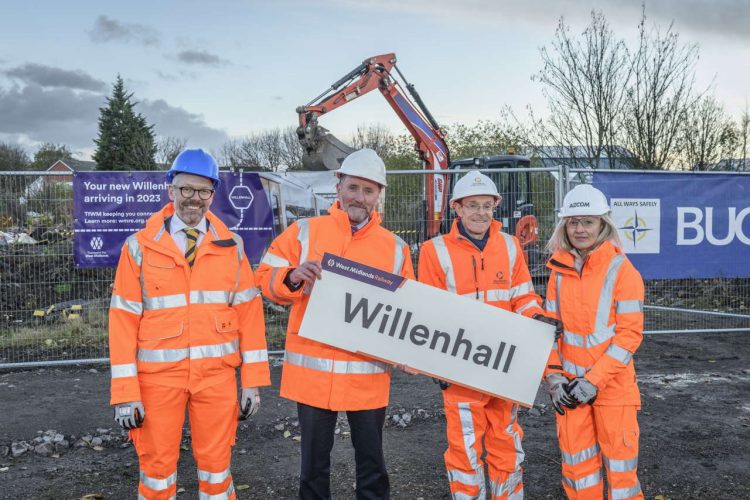 The Wolverhampton to Walsall line in the Black Country has seen construction work start for a new railway station at Willenhall.

Workers are currently clearing the waste ground of rubble, ready for the new station to be built.

The new station is part of a £54 million project to build two new stations, the one at Willenhall and a second one at Darlaston, in preparation for the return of passenger services.

Only freight rail services currently use the line. It has been over 50 years since they have used the line for passengers. The new stations will allow Black Country communities to be directly connected to regions rail network.

Passengers will be able to travel to Birmingham New Street in 25 minutes, or in just eight minutes they can arrive at Walsall or Wolverhampton once the new station opens.

There will be an hourly service from Birmingham New Street and Crewe, calling at Wolverhampton, and an hourly shuttle between Walsall and Wolverhampton at both new stations.

The Mayor said: “It has been a long time coming, but it really is fantastic news that the diggers are on site and our plans to bring Willenhall Station back to life are becoming a reality.”

“People in Walsall have waited decades to see this station return, and with Darlaston to follow shortly afterwards as part of the re-opened Walsall to Wolverhampton line, this really is a game-changer for the Black Country.”

“Not only will these stations provide a genuine public transport alternative to the car, but they will also help connect local people to the high quality jobs and opportunities being created across the wider region.”

Walsall North MP Eddie Hughes said: “The railway station will be a lifeline connecting the people of Willenhall to opportunities for jobs, training and leisure across the region, cutting those journey times.”

“It will also be fantastic for the town, bringing people into the centre of Willenhall and supporting the regeneration of the area.”

Cllr Adrian Andrew, deputy leader of Walsall Council, added: “This has been talked about for decades, so it is great to see some action on site – we are now entering the final stages of restoring rail service to Willenhall.”

“This is a huge investment in both Willenhall and Darlaston and will have a huge positive impact on these communities, opening up opportunities across the region for them. It could also be the catalyst for further investment and improvements.”