Carbon emissions cut with the new trains in East Anglia 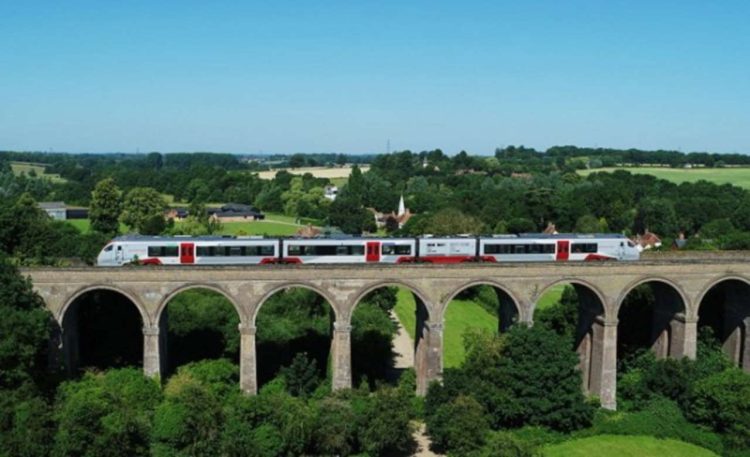 Transport day at COP26 will see Greater Anglia showcase the environmental benefits of their new trains.

As Greater Anglia replace their old trains, the new innovative trains are already in operation on many of the Greater Anglia routes including intercity, Stansted Express and regional lines.

Even more passengers will be able to be accommodated on the new longer trains due to the extra seating created which also means that more cars will be taken off the road stopping tonnes of CO2 emissions from being released alongside the additional benefits of cutting road congestion.

A Greater Anglia intercity train travelling with full capacity could take up to 504 cars off the road.

The company’s new five-carriage electric commuter train could also take up to 362 cars off the road – or even a massive 725 when they run as ten carriages.

Those travelling with Greater Anglia can check how much they could reduce their carbon emissions by swapping car travel for train travel using the carbon calculator on the companies website:

Other green features of the new trains include the use of bi-mode trains which have the ability to run using electricity or diesel and have replaced some of Greater Anglia’s oldest diesel-only trains.

The new trains will be able to run completely on battery power instead of diesel as changes are made in the future.

Made by Swiss manufacturer, Stadler, the bi-mode trains meet modern emissions standards and help bring down nitrogen oxide emissions from diesel engines by injecting “AdBlue” into the exhaust where it converts the nitrogen oxide to nitrogen and water vapour, and brings a cut in nitrogen oxide particles caused being released into the atmosphere from exhaust emissions.

Other features of the bi-mode trains when running in diesel mode is onboard technology which allows trains to be driven without powering up all of the two or four diesel engines, meaning that drivers can use “coast mode” and reduce the need to use more power.

Braking electrically can also be utilised when in diesel mode and means that electricity can be generated and re-used within the on-train systems such as heating and lighting, another benefit of this is that fewer brake pads are used and therefore less dust is released into the environment. All of Greater Anglia’s new fleet feature “regenerative braking” with the new intercity and Stansted Express electric trains generating more instantaneous power when braking than they need while accelerating.

The new electric trains are much lighter as they are made from aluminium, with the front of the trains aerodynamically streamlined to provide energy efficiency, especially when trains are travelling at high speeds.

The new Alstom commuter trains bogies (the framework which attaches the wheels to the train’s undercarriage) is a brand new design and is 30% lighter than those used previously which cuts aerodynamic drag on the trains.

LED lighting is standard throughout the new trains and also on Greater Anglia’s new Alstom electric commuter trains and feature “eco mode” where the lights dim and brighten depending on external light and makes onboard energy use as efficient as possible.

All of the new trains also include “hibernation” or “intelligent stabling” which cuts power usage by switching off lights, heating and ventilations systems which are only turned back on when in passenger service or during very low temperatures.

Alongside all of the amazing environmentally friendly features are the energy-saving intelligent computer systems which actively monitor the trains’ maintenance status and brings down the need for unnecessary maintenance saving both money and energy.

It is expected that the new trains will reach their end of life by 2060 and they have been built specifically so that virtually all components can be recycled bringing further reductions to Greater Anglia’s carbon footprint.

“New trains are built to last. Some of our old trains were over 45 years old. If our new fleet could be running around the rail network for the next 45 years, it’s important that they are as kind to the environment as possible and designed to help us embrace future technological developments too – such as improvements in battery power.

“Rail travel is the most sustainable form of transport after walking and cycling, and we are keen to make it even more sustainable, by running more energy-efficient trains and cutting our carbon emissions.

“Climate change is of growing importance to our customers and we are keen to do our bit to help combat it and also contribute to a better environment and less air pollution in the communities we serve.” A derelict area next to Rayleigh rail station in Essex has been turned by volunteers into a new...