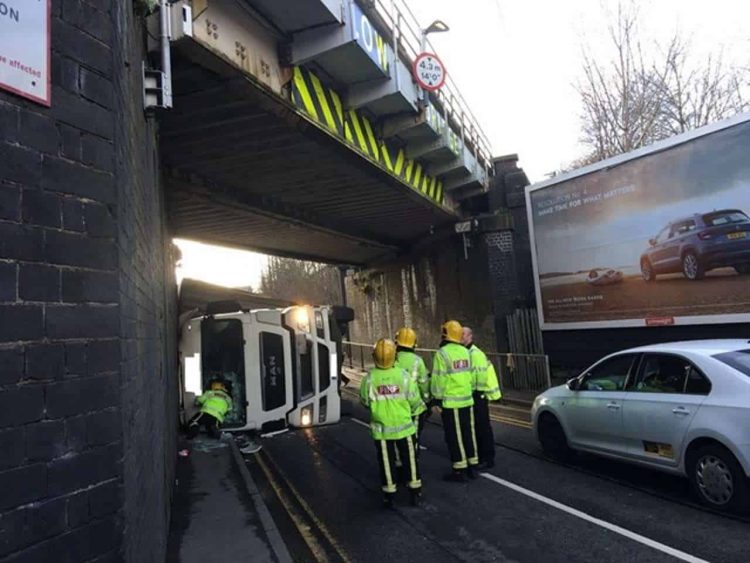 Network Rail has revealed the most-struck railway bridges in the country.

The bridge that bears the unwanted title of the most bashed bridge in Britain is the Coddenham Road bridge on the B1078 in Needham Market, Suffolk.

In an attempt to minimise future bridge strikes, Network Rail has re-launched its ‘Wise Up, Size Up’ campaign. This is intended to remind lorry drivers and haulage operators that they should know the height of their vehicles before they set out on their journeys, and to choose routes suitable for their vehicle’s height.

Network Rail is also running a 4E’s initiative. The four Es – education, engineering, enablement and enforcement – aim to ensure haulage companies and their drivers are provided with the knowledge and tools they need to avoid striking bridges. To support the initiative, Network Rail has a team of bridge strike ‘champions’ who cover each route across Britain.

The teams visit haulage companies to raise awareness of the problems caused by bridge strikes, and take the lead in managing bridge strike risks locally.

Over the next four weeks, reminders to ‘Wise Up, Size Up’ will feature on posters at motorway service stations across Britain, urging drivers to check the size of their vehicles and their routes before setting off.

We are now approaching what is traditionally the peak period for bridge strikes – the annual Black Friday and Christmas shopping rush. This year, Network Rail’s campaign is more important than ever, as there will be more newly qualified lorry drivers on Britain’s roads to fill an estimated shortage of 100,000 drivers according to a Road Haulage Association survey of its members.

Sir Peter Hendy CBE, chair of Network Rail, said: “Bridge strikes cause unnecessary delays, costs, and safety issues for road and rail users. To compound matters, they drain public funds which should be used on upgrading and improving our network. In recent years we’ve done a lot of work with partners across the industry to tackle the problem and whilst it’s encouraging to see numbers on the decline, there’s a lot more work to be done.

“With Black Friday and Christmas fast approaching, we urge professional operators and drivers to properly plan their routes, know the height of their vehicles and look out for road signs warning of oncoming bridges. Those who don’t are at risk of losing their driver’s and operator’s licences, and Network Rail looks to recover the entire repair and delay costs from the driver’s employer.”

Most struck railway bridges in Britain 2020/21:

Bridge strikes reported across the railway network in the last five financial years: Maidstone East railway station was officially opened on Thursday, 2 December by the Mayor of Maidstone after a...