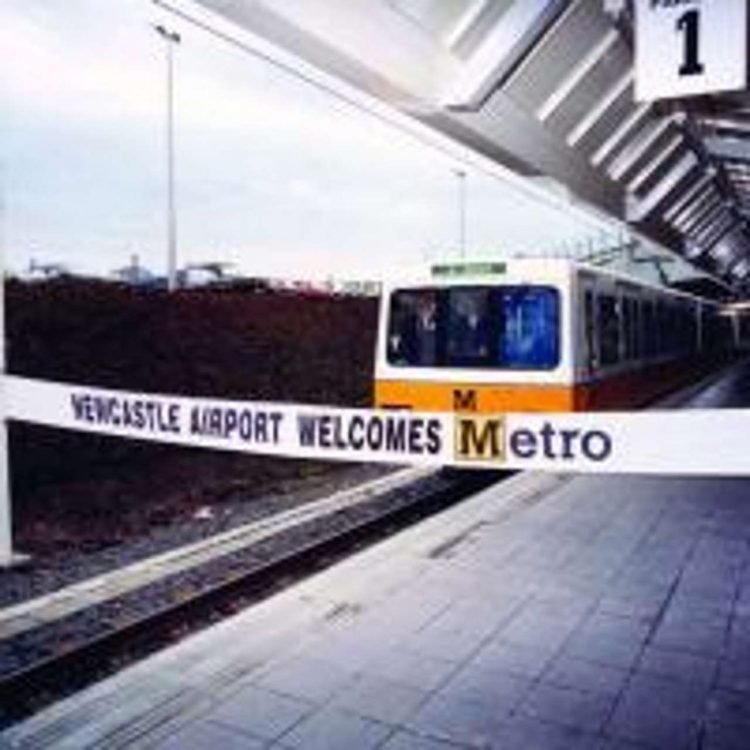 Tyne and Wear Metro is celebrating the 30th anniversary of its extension to Newcastle Airport.

The line cost £12m, and opened on November 17, 1991, and provides one of the country’s fastest transfers between airport and city centre.

As the airport has grown, the line has benefited millions of holidaymakers and business travellers, and has carried 7.5 million customers since it opened.

Metro is owned and managed by Nexus, which considers the airport line to be one of the more important projects in Metro’s history.

Construction of the line began in 1990 with funding from the EEC, the forerunner of the European Union. It was the Metro’s first extension of Metro since 1984 with the line to South Shields, but even when Metro opened in August 1980, local politicians wanted the line to be extended to the airport.

The new airport station was built into a cutting to ensure that the railway’s overhead lines and signalling equipment were well below the flight path. The station building has a unique pyramid design, and was constructed next to the airport terminal, with a walkway connecting the platforms to the airport terminal.

A major challenge for Nexus staff is keeping the western end of the line beyond Bank Foot station open, especially in winter, as the higher elevation of the railway here makes it susceptible to heavier snowfalls. Due to the line’s exposed conditions in the open countryside, windblown snowdrifts can be a problem.

Metro Operations Director, John Alexander, said: “Extending the Metro system to the airport created a vital strategic link for North East England. It was one of the most crucial developments of the network in its history, and it has been a real success story for us.

“The airport has grown massively since 1991 and Metro customer numbers have reflected that. We’re proud to be part of that growth story.

“It was a vital shot in the arm for the local economy, and for the growth and profile of Newcastle International Airport itself.”

Graeme Mason, Planning and Corporate Affairs Director at Newcastle International Airport, said: “As the North East’s largest Airport we are fortunate to benefit from excellent surface access links for our passengers to use. The Metro plays a vital role in providing convenient connectivity between the Airport, Newcastle city centre and beyond and we are delighted to celebrate the 30th anniversary of the partnership this month.

“From a personal point of view, I have used the Metro daily during my time at the Airport to travel to and from the office, as well as to off-site meetings across the region.

“As part of our Net Zero 2035 strategy, which we announced in early 2020, we have committed to working closely with local transport partners to encourage more passengers to travel to the Airport by sustainable means, including the Metro.”

Retired Metro driver Michael Bushby has the job of taking the first passengers to Newcastle Airport in 1991.
He said: “I remember the airport extension opening back in 1991 because it was quite an exciting project and somewhere new to drive the trains. There are lots of things on the airport route that you don’t get anywhere else on the network – not least the special trip wires in case of low flying planes.

“It’s a much more scenic part of the line than most of the rest of the network. Most of time you are travelling through urban areas, but this route is different. You get to see a glimpse of the country and a lot of wildlife, which can make the journey that bit more interesting.

“I was working on the day of the opening and I remember driving a train up to the airport around mid-morning. There was a lot of hype and press interest. People were on the platforms at stations from Bank Foot onwards meeting and welcoming passengers onto the first trains.

“All drivers had to be assessed and trained on the new route and I remember that the operations manager at the time was there congratulating us for being the first drivers of airport passenger services as we arrived on the platform.

“Generally speaking people travelling to and from the airport are in high spirits and you get to meet some lovely people. It’s a lovely place to travel to as a driver. Even the ones coming back from holiday seem happy to see you. After flying back from holiday, shattered, they know that you can take them home. I always tried to greet them with a smile. Whenever I’ve been off on holiday with my wife and two daughters I’ve used the Metro as a passenger to get to the airport, and it’s great.”