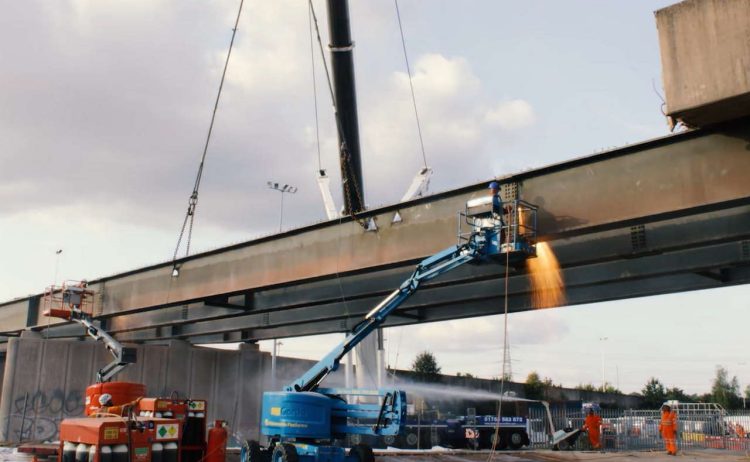 A disused bridge in Saltley near Birmingham has been demolished to make way for the northern section of HS2’s Phase One route between London and the West Midlands.

The work was carried out by HS2’s main civils work contractor Balfour Beatty VINCI (BBV) as part of preparation for the next stage of the enormous HS2 project.

Originally connecting the A47 with an industrial park, Heartlands Parkway bridge provided a crossing over the well-used Birmingham to Derby line and had been out of use for quite some time.

The bridge stood in the path of the HS2 line heading into the new Curzon Street Station in the centre of Birmingham.

The successful demolition of the bridge means that Balfour Beatty VINCI is now able to build the one-kilometre Washwood Heath retained cutting.

The work will begin with the building of piling platforms for the 1,800m diaphragm wall with the actual piling work set to commence later this year.

HS2’s Washwood Heath Depot will be built right next to the railway on 40 acres of brownfield site which will be transformed into a central control centre and maintenance depot which will feature a 40,000m² rolling stock maintenance building, carriage wash, automatic vehicle inspection building and 14 sidings to provide overnight train storage. Three companies have been invited to tender for the contract to build the depot and control centre which once built will create up to 500 long-term jobs.

Jean-Baptiste Tessier, Construction Director at Balfour Beatty VINCI said: “The demolition of the A47 bridge signifies yet another milestone in the delivery of the northern section of the UK’s high-speed railway, paving the way for the new HS2 route into Curzon Street Station. Over the course of four weekends, our expert team safely and successfully removed the structure, working alongside Network Rail and Birmingham City Council to reduce disruption to the travelling public, wherever possible.”

Patrick Cawley, Director of On Network Works for HS2 Ltd and Network Rail, said: “We kept passengers on the move over the affected weekends, following close collaboration with our train company partners and Balfour Beatty VINCI. The A47 Heartlands Bridge demolition was a highly complex project affecting major pieces of rail infrastructure: although the bridge had been out of use for some time, it crossed the busy Birmingham to Derby line. Our Asset Protection Engineers worked with HS2 Engineers to allow them to safely complete the work while causing the least amount of disruption possible.”

Tony Fenwick, Operations Director for John F Hunt Regeneration (Industrial) said: “The location of the bridge was particularly unique as it crossed over seven freight and commuter rail lines and was originally constructed using over 685m3 of concrete, 165 tonnes of reinforcement and 250 tonnes of structural steel.

“Fifty people were involved in the precision operation each weekend, with engineers using specialist equipment, including excavators fitted with concrete pulverisers and breakers to demolish the bridge piece by piece, allowing the structural steel to be lifted away by crane. It was a great experience to help deliver such a crucial part of the HS2 project.”

Model Railway Exhibition set to be held in Pendle this November