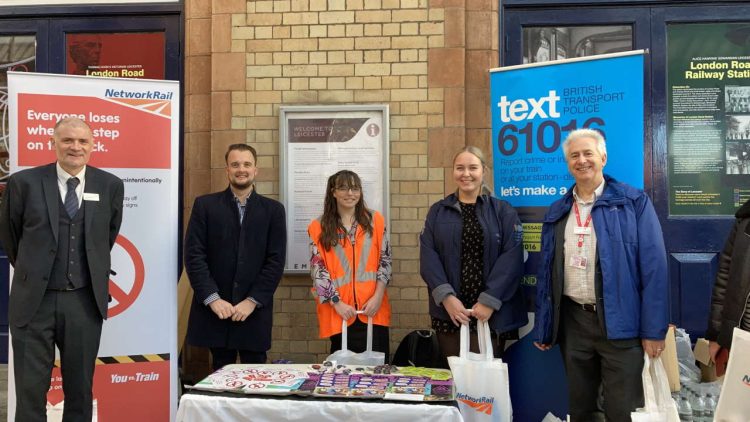 Passengers at Leicester station were joined by Network Rail, East Midlands Railway, CrossCountry and British Transport Police in a bid to tackle trespass and vandalism on the railway.

Teams were speaking to both passengers and people in the local community about the risks of stepping on the track and the life-changing and fatal consequences trespassing can bring.

The initiative also gave members of the public a chance to put their thoughts and ideas forward as to how people could be encouraged to use the railway safely and also identify any risks or suggest possible solutions.

Over the past five months, sixteen trespass incidents have been reported on the railway at Leicester station or close by. Three of the incidents have seen individuals intentionally put items on the track or thrown them at trains.

Trespass and vandalism are incredibly dangerous not to mention illegal and can also lead to disruption to services for passengers. The unacceptable behavior can also mean trains need to stop or run at low speeds as teams respond to reported incidents and undertake investigations in the area. One incident which occurred at Leicester station caused 62 trains to be cancelled.

Steve Hopkinson, Operations Director for Network Rail’s East Midlands route, said: “The incidents in and around Leicester station are absolutely shocking. They could have resulted in devastating consequences for the individual, their loved ones, and the wider community.

“We’re determined to tackle trespass and vandalism, and as we continue to warn people of the dangers, we want passengers and people in the community to have their say on how we can make sure people use the railway safely.”

Paul Barnfield, Operations Director for East Midlands Railway, said: “The recent trespass incidents in and around Leicester station over the last few months are alarmingly high.

“By working with Network Rail and the British Transport Police at events at our train stations, we’re hoping to warn people of the dangers of trespassing and the devastating consequences stepping onto the tracks can have for everyone involved”.