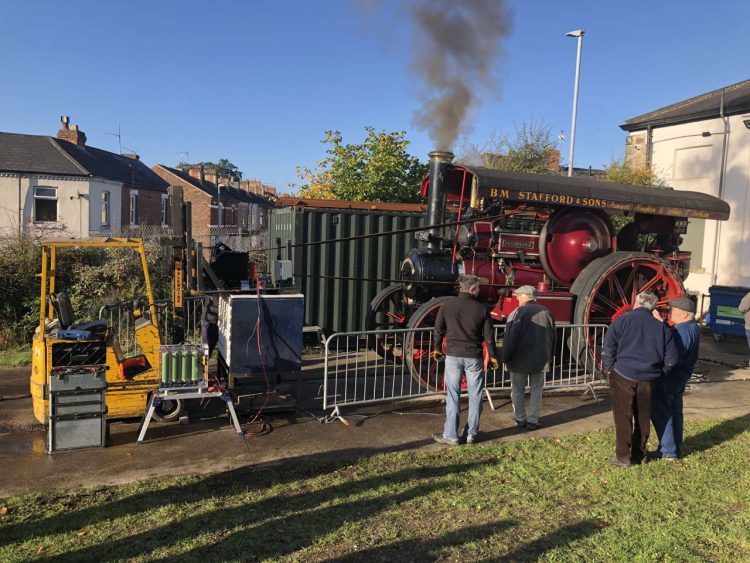 An engine was once more in steam at Darlington Locomotive Works last week. However, this was not a railway locomotive, but a road one. It was needed for some tests on LNER Class P2 2007 Prince of Wales, which is being built at the works.

A source of power was required that would not generate electrical interference whilst testing a new axle-driven alternator (ADA) which is to be fitted to all of the P2 Locomotive Trust’s locomotives and support coaches.

The trust’s Head of Electrical, Rob Morland, and his team designed and built the new system, which uses a 180A 28V truck/bus alternator fitted into a very-solid steel casing. That will replace the Stones Altonum alternators currently used, which are from early-1960s British Railways Mk. 2 coaches. These are becoming increasingly difficult to source, and usually require a complete and very expensive overhaul. Their regulators also use 1960s transistors, which are equally hard to find.

A 2.5:1 toothed belt drive system derived from the axle pulleys on the coaches was fitted within the casing to get the alternator running at the required speeds, or rather on the tenders of Peppercorn Class A1 60163 Tornado and Gresley Class P2 2007 Prince of Wales.

To check the output, temperatures, and endurance running, a test rig was built. EMC (Electro Magnetic Compatibility) tests were also required, but as the test rig comprises a squirrel cage induction motor with an electronic speed controller, it was likely to produce a significant amount of electrical noise in its own right. With this in mind, it was realised that on those occasions when EMC testing was taking place, a medium-sized traction engine could provide a suitable drive system that would be suitable. There would be no electrical interference, and it could test from the lowest to the highest speeds using a large flat belt of the sort used for operating saw tables, etc.

Providence, a 1920 Leeds–built 7NHP Fowler steam road engine owned by Howard & Barry Stafford of Houghton-le-Spring provided the ideal solution. The engine is a two-cylinder compound with a governor which makes it ideal for the task, and came complete with belt. Howard & Barry Stafford kindly donated their time and the P2 Locomotive Trust supplied the coal. Eurofins of York conducted the EMC tests on the morning of Thursday 21 October.

The new design of alternator will eventually be fitted to 60163 Tornado, 2007 Prince of Wales, and a proposed Gresley class V4, together with their support coaches.

The set-up could be likened to the Titfield Thunderbolt, or rather should it be Iron Maiden, but it will enable all necessary electronic systems to be fitted to the P2 Locomotive Trust’s locomotives, and provide the increasing amount of electrical power required by them.

This is another stage towards completion of Prince of Wales, and another way in which the trust is finding new ways to ensure that it can continue to operate steam on the modern mainline railway. The tender, once destined for use on LNER B17 61662 Manchester United, has been moved to be used...