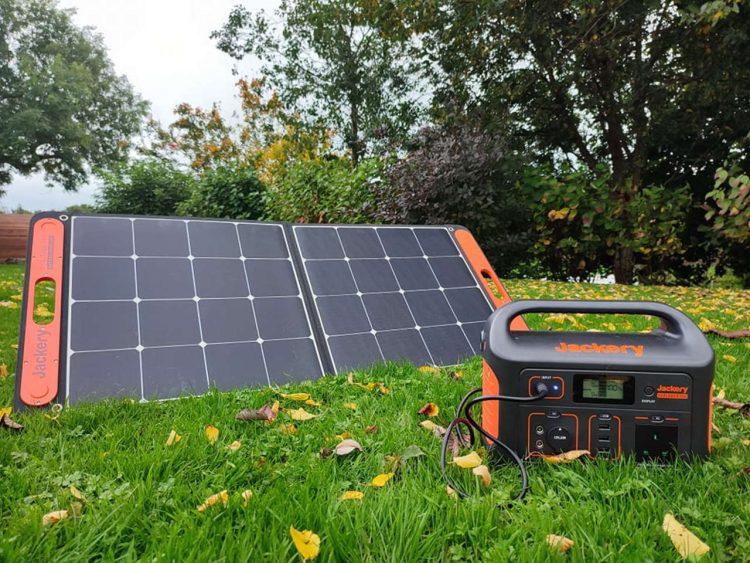 Portable Power Stations are becoming ever more popular as video and photography enthusiasts carry an ever increasing number of devices with them for filming and processing video for social media.

All these devices have a limited battery life and whilst smaller power banks can be useful in some cases, larger cameras, laptops and other equipment require mains power to charge them.

The Jackery Portable Power Station Explorer 500 contains a 518wh lithium ion battery and provides a number of options for charging devices and a number of ways for itself to be charged.

There are 3 USB 2.4amp ports along with a 12v car plug and a 230v Pure Sine Wave plug socket. Put simply, Pure Sine Wave means it will be compatible with all devices (subject to power requirements of course), some cheaper inverters provide a Modified Sine Wave output, which can be less kind to devices, making them run hotter and potentially wear out quicker.

The Power Station can provide up to 500w of power at any one time, up from the 200w of the Explorer 240 previously reviewed.

The larger sized battery and increased wattage means that not only can you charge devices for longer, you can also plug in higher powered devices.

So taking a look at the connections in more detail:

As seen in other Jackery devices, the Power Station Explorer 500 supports pass-through charging which means it can charge devices whilst being charged itself, this is especially useful when used in conjunction with the Solar Panel.

Each output has its own on/off switch allowing you to choose which ports are being provided with power. The unit is also fitted with an LED torchlight.

As well as providing power to camera equipment, there are many other uses for a Power Station. For example, subject to power requirements, you could use a Power Station Explorer 500 to power:

The Jackery Power Station Explorer 500 comes as standard with a mains charger and a car charger and in our testing the battery took around 5.5 hours to fully charge.

We tested a few devices with the Power Station Explorer 500 and found that:

The Power Station Explorer 500 is available from Amazon for £529 and you can purchase it by clicking here – at the time of writing, there is also a £30 off voucher available via Amazon

The portable SolarSaga 100 Solar Panel works superbly when used in conjunction with the Power Station Explorer 500 but can also be used as a standalone device.

The Solar Panel is IP55 rated, meaning it is water-resistant but is not waterproof and cannot be used out in the rain. The Panel weighs 4kgs and measures 54cm by 61cm when closed, and 54cm by 123cm when open. It includes two fold away legs so that the panel can be angled in the direction of the sun.

A bonus to the Solar Panel is that it includes a Type C port along with an additional USB Type A port, the Power Station Explorer 500 doesnt feature a Type C port – something we feel would be a great addition to a future revision.

The Jackery SolarSaga 100 Solar Panel is available on Amazon for £259.99 but at the time of writing is available with £20 off. Click here to find out more information.

Connecting up the Solar Panel to the Power Station is simple enough, just a case of plugging in the cable.

In our tests, the Solar Panel provided 70W of power to the Power Station during sunny weather, though this reduced to around 16W when the sun disappeared behind the clouds, and down to 3w on an autumn cloudy and dull day.

As mentioned before though, the Solar Panel 100 is best used with a Power Station to keep it topped up whilst the battery provides the power to your devices.

Materials on the Solar Panel are high quality and can be set up and put away quickly, with magnets making sure that the panel stays folded when put away.

The Jackery SolarSaga 100 Solar Panel is available on Amazon for £259.99 but at the time of writing is available with £20 off. Click here to find out more information.

The Solar Panel and Jackery Portable Power Station Explorer 500 both work well together and if you have ever been in a situation where your device has a flat battery that needs charging or you have a mains powered device that you would like to use away from a power socket, then these are the products for you.

Instead of investing money in smaller power banks, car chargers, inverters, spare batteries etc, you could use what you already have and use the Jackery Portable Power Station Explorer 500 for everything.

As mentioned earlier, with more devices Type C Power Delivery, it would be great to see a future revision add these options.

Amazon Links to all products:

A big thank you to Jackery for sending both the Solar Panel and Power Station Explorer 500 to RailAdvent for us to review.

Fast WiFi vital to encouraging passengers back to rail travel?