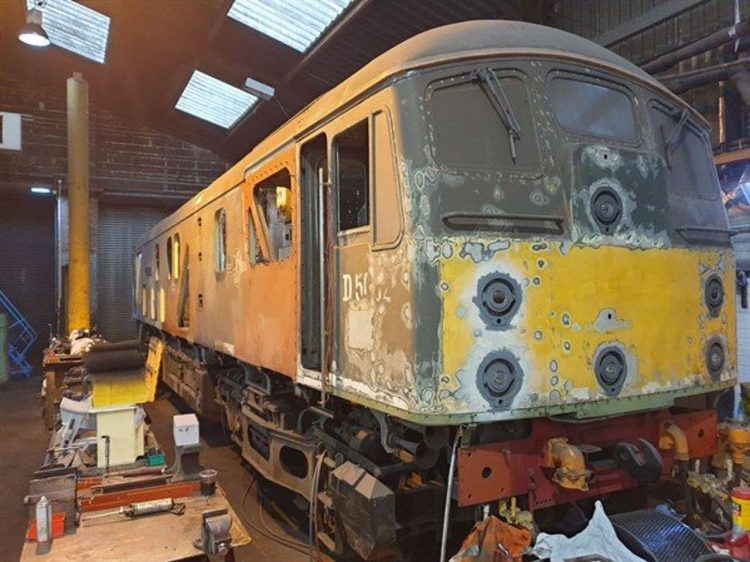 Nick Simpson, the manager of North Yorkshire Moors Railway’s (NYMR) motive power depot at Grosmont, has given an update on the overhaul of Class 24 diesel locomotive D5032 Helen Turner.

In 1976, the NYMR loco hired the loco from metal processors T. J. Thomson Ltd for use during the summer drought.

It became the first ex-British Railways main-line diesel-electric locomotive to be preserved. On 30 October 1982 it was named Helen Turner, after the owner’s daughter, in a naming ceremony at Grosmont. Since withdrawal from traffic, the railway has purchased the loco from the owners.

Originally designated as a Type 2, 151 were built at Darlington, Derby and Crewe works. D5032 was one of the Crewe-built locomotives, entering traffic at March, Cambridgeshire in July 1959. It moved to Stratford the following year before being transferred to the London Midland Region in 1961, first at Willesden then at Bletchley. The locomotive was withdrawn from Crewe Diesel Depot, as 24032, on 17 July 1976.

After 45 years on the NYMR, major work is being undertaken to rebuild to get it running once more.

The roof sections and floor panels have been removed, the entire radiator compartment has been rebuilt with new radiator tanks made on site, and all overhauled elements and both radiators have been re-installed.

Rotten structural steelwork in this area has been replaced, and the whole system up to the engine has been newly plumbed, with all pipework having been cleaned, fitted and repainted.

NYMR volunteers have overhauled the brake frame, including stripping, examining, and rebuilding all the valves in the frame ready for service.

Both cabs are life expired and are receiving attention. They have been stripped out, all wiring has been replaced and the trunking it runs in fully refurbished. The electric cubicle has also been rewired, and all electrical machines above the running board have been overhauled on-site at Grosmont, including the triple pump, radiator fan motor, and traction motor blower.

With all work now nearing completion, work has started in Grosmont works on the engine unit. The turbo has been removed, stripped, and rebuilt, and the engine itself has been stripped of its air intake, exhaust, covers, and heads.

These are just a few of the jobs to be done. For example, nearly 2,000 pop rivets in the roof sections and cabs have been replaced.

Looking ahead, once the engine has been rebuilt, the loco will need lifting so that the bogies can be examined and overhauled, traction motors examined and rebuilt, cabs fitted out and refitted, paint applied and the roof replaced. This extensive work will ensure that the loco enters traffic in prime condition.