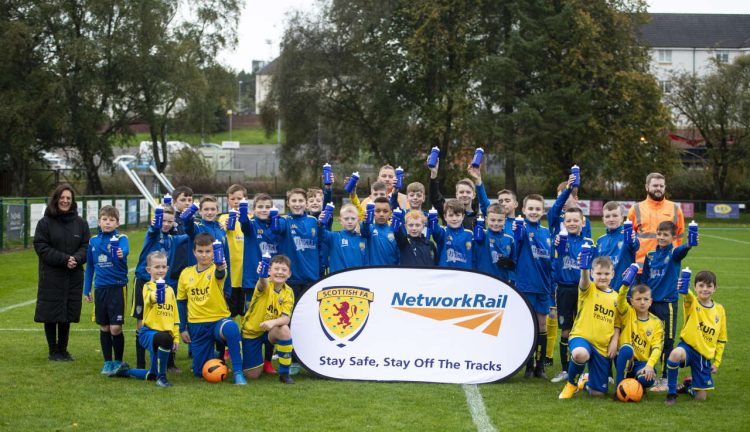 Young people in East Kilbride will benefit from a combination of professional coaching by the SFA with rail safety messages being provided by Network Rail and British Transport Police as part of the East Kilbride Project.

Aimed at children between 7 and 11 years old, the first of the events took place with East Kilbride Youth Club at their ground in Kirkonholm which is situated next to East Kilbride Station.

The camps are a bid to raise awareness of the dangers that railways present, the message is also timed just ahead of work to electrify the line and upgrade the infrastructure including the new Hairmyres station.

Collette Stevenson MSP said: “Safety education is crucial to our young people especially as we aim to promote more green transport links in our communities.

“The young people involved really embraced the safety talks and the variety of stakeholders such as British Transport Police and the SFA who were involved all played an active part in ensuring it was a fun day whilst raising awareness of station and track safety.

“Network Rail’s long-term commitment to embed themselves in our local communities is very welcoming and I look forward to working with them in the future.”

Graeme Robertson, club manager at EKYC, said “We were delighted to host the safety event with Network Rail and the Scottish FA. It was a fantastic day that allowed local kids to get involved in outdoor games and learn more about safety on the railway and the up-and-coming electrification project.”

The railway safety-focused football camps have seen Network Rail and the Scottish Football Association work together since 2018 seeing more than 45,000 children throughout Scotland take part in the initiative.

Kevin Rooney, Network Rail project sponsor for the East Kilbride works, said: “Any incident in which a member of the public is injured or killed while on the tracks is a tragedy and something we work hard to try to prevent.

“Keeping people safe on and around the railway is at the heart of everything we do, and we were delighted to work collaboratively with Scottish FA and BTP on delivering rail safety messages amongst the local community in East Kilbride.

“The work we are undertaking will mean faster, quieter electric trains will be running on the line and overhead power cables carry enough electricity to kill anyone who comes into contact with them. Making people aware of these dangers is a vital part of the enhancement project.”