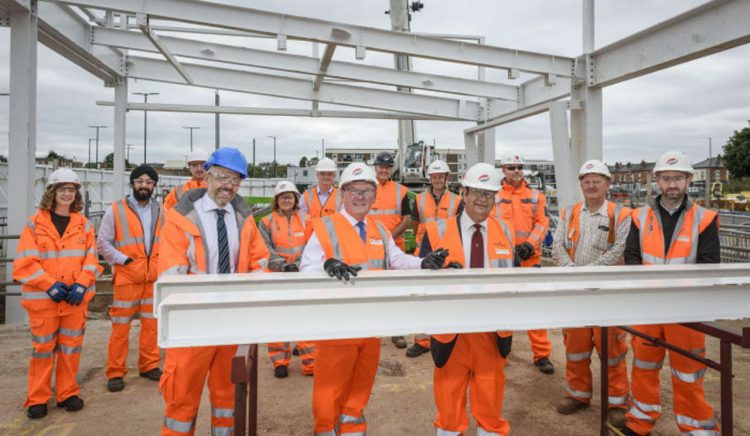 Swift progress is being made on the £30.8m rebuild of Perry Barr railway station. The development of the station is coming along well and is expected to be ready ahead of Birmingham’s 2022 Commonwealth Games.

Currently, the steel frame which will form the base of the new station building is coming together well and will see the structure ready to be opened as early as next spring.

The development site had guest visitors including Deputy Mayor of the West Midlands Cllr Bob Sleigh, who was keen to get an update on the project’s progress and also to sign the steel girders which will preserve the visitors names within the building for posterity.

The brand new station will be a fully accessible station once finished and will feature a ticket office, toilets with baby changing facilities, lifts and also new stairs to the platforms. The old station building was considered by many as one of the most unsightly stations in the region, with the new station sure to be a welcome replacement.

Perry Barr station and the nearby bus interchange are also included in an extensive £500+ million investment in the Perry Barr area led by Birmingham City Council. The huge project is called the Perry Barr regeneration programme and will see new housing, improvement to public transport, walking and cycling routes, new facilities within the community and vibrant public spaces to recreate Perry Barr as one of the best connected areas in the region.

Cllr Sleigh said: “It was only a few weeks ago that the old station was demolished so it is encouraging to see such rapid progress being made on site. This railway station will not only be a new gateway for visitors to Alexander Stadium for the Commonwealth Games next year, but also provide a more welcoming and accessible facility for residents of Perry Barr for years to come.”