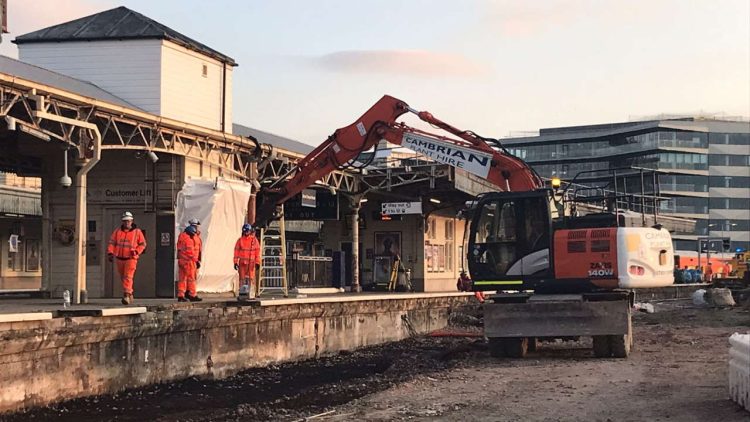 Network Rail has completed the first stage of the new entrance at Bristol Temple Meads Station which will bring a brand new gateway connecting passengers to the east of the city.

The brand new east entrance will be positioned at the far end of the current passenger subway when complete, and will make for better access to the station allowing for a higher volume of passengers. The east of the city is also undergoing development of a site on Cattle Market Road and is where the University of Bristol has planned the Temple Quarter Enterprise Campus.

Network Rail engineers along with contractors BAM Nuttall have put in place 18 concrete piles with a depth of more than 20 meters into the ground beneath platform 15 and will provide support for the new structure. The first stage of work also saw a 750-tonne crane lift precast units into position to create a bridge which will allow the track to be re-laid on top and will also mean that trains can pass overhead once again.

Along with the eastern entrance, Bristol Temple Meads will also be undergoing other wider-reaching improvements which will support the Bristol City Council regeneration project for the Temple Quarter Enterprise Zone and will make the station a key transport hub, providing passengers with an easier option for getting around the city and bringing an improvement to connectivity in the West of England region.

Network Rail planned the work carefully so that the initial stage of the £20m project was completed at the same time as work being undertaken at Bristol East Junction to make the most of the opportunity to work whilst train services were out of action, working this way also meant there would be less overall disruption for passengers. The project has been funded by the West of England Combined Authority.

Autumn will see the second stage of the work undertaken and will feature the installation of a new ticket gate and also a small entry building which is in the design stage at the moment.

The Bristol Rail Regeneration programme will also see a number of improvements carried out to the iconic Bristol Temple Meads station building over a period of three years. The programme will also bring major investment to sustainable transport through the region, serving millions of passengers every year, which in turn will offer benefits to businesses throughout the area.

Dan Norris, West of England Metro Mayor, said: “If we are to meet our ambitious 2030 net zero target we need our public transport network to be much better than it is. Getting people on to trains is a key goal. We are proposing £350m for transport over the next 20 years. These are significant changes which will take many years to complete, but the wheels are being set in motion.”

“We maximised the opportunity to install the piles and pre-cast units while our colleagues were completing the Bristol East Junction upgrade and train services were not running, meaning we will not need to disrupt passengers on a separate occasion.

“This is a really exciting project that once complete, will open up the station to the east of the city and play a key role in offering access to the future supporting rail travel.”

Phil Bowcock, Operations Manager, BAM Nuttall said: “BAM Nuttall has been renewing, restoring and improving access to Britain’s Railway for over 20 years. We understand the value of railway heritage but also recognise the need to modernise our infrastructure in order to meet passenger expectations, unlock economic improvement and offer environmentally friendly sustainable solutions.

“Bristol Temple Meads is a station steeped in history and it’s a real privilege to contribute towards the next phase of its development. On completion of the Eastern entrance, the railway will, once again be a catalyst for development within Bristol and we are proud to play a small part in that.”