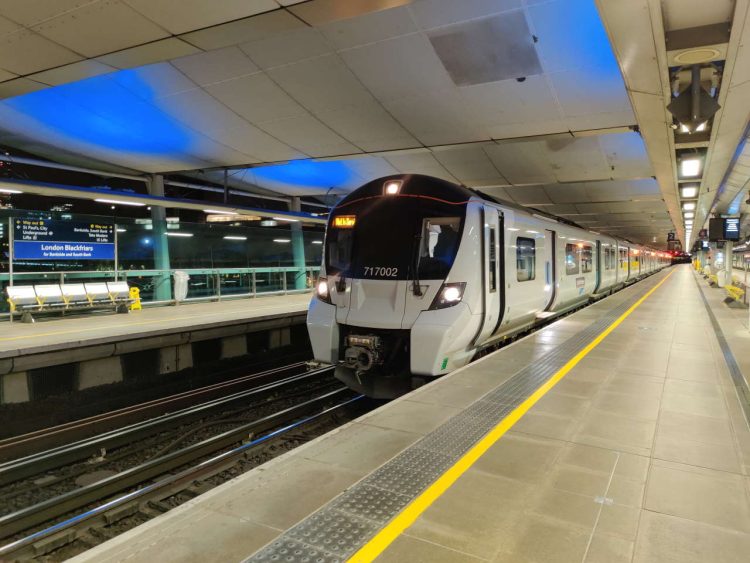 The unit running the test was 717002 which had an upgraded baseline from the current Class 700 Thameslink ETCS system operating through the Thameslink ‘core’ between St. Pancras and Blackfriars in central London.

Already fitted with ETCS, Govia Thameslink Railways (GTR) Class 717 Moorgate trains had not yet tested the system out on Network Rail infrastructure and across this specification with the Thameslink ‘core’ already featuring ETCS signalling framework which meant that the train could be tested.

The ETCS allows continual communication with a train, providing the ability to create a smooth and maximised flow of trains, which will bring a more dynamic, reliable, safer and flexible railway.

As a mixed-use railway, the East Coast Main Line sees trains of differing sizes and speeds for both passenger and freight, all of which use the same tracks. The innovative radio-based signalling can recognise the differing types of trains and makes it possible to let both train and track talk to each other endlessly and in real-time, which will bring higher performance and a more reliable railway.

A transition to ETCS for The Northern City Line to Moorgate in Central London will start during 2022, with the intention of turning off conventional signalling during 2023. The system is set to be rolled out throughout the East Coast Main Line as far as Stoke Tunnels, which is south of Grantham.

Oliver Turner, who heads up GTR’s input to the industry-wide East Coast Digital Programme, said: “On the Northern City Line, the new signalling system being installed on our trains and tracks will save passengers thousands of hours of delay caused by the current ageing system.

“A key milestone was to run one of our Moorgate trains in ETCS mode using the software that will be ultimately used across the East Coast Mainline. I’m pleased to report it did that with flying colours.”

Toufic Machnouk, Director Industry Partnership Digital, Network Rail said: “This is the first time a train of this specification has been tested dynamically, in the real world, against the infrastructure specification. It represents a small but significant step for the East Coast Digital Programme and is a crucial point of confidence for a smooth migration to ETCS operations, delivering progressive benefits to passengers.” The improved secure cycle parking hub was opened by Daisy Cooper, MP for St Albans and is hoped...