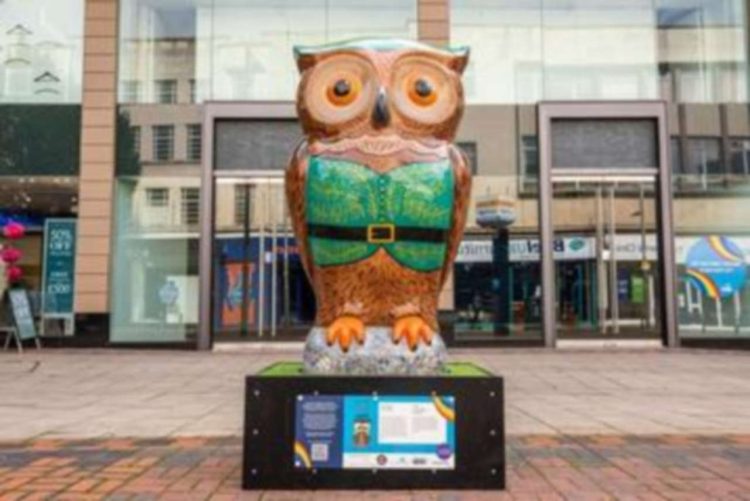 East Midlands Railway (EMR) have partnered up with not-for-profit company the Nottingham Business Improvement District (BID) to exhibit the colourful and uniquely named owls around Nottingham station as part of the Nottingham Ale Trail festival.

The popular month-long festival is a celebration of local pubs, breweries and cask ales available in the city centre and runs from Friday the 3rd of September through to Sunday the 3rd of October.

Just outside the train station is micro-pub BeerHeadz, who will be taking part and will no doubt be a popular first and last stop for festival-goers.

The ten arty owls each come with their own Nottingham themed name and can be found under the cover of the main foyer which connects to the tram terminus at the station, and will be a bright and cheerful greeting for visitors and passengers as well as those enjoying Nottingham Ale Trail.

The Nottingham themed owls are called:

The fabulous owls have been made by Wild in Art, who have previously created a well-loved trail of robins for the ‘Hoodwinked: A Twist on the Tale’ which was based on the Robin Hood legend and stories.

Free maps and cards have been created by Nottingham BID which shows six themed trails based on Nottingham’s most famous outlaw, Robin Hood. People can use the maps to navigate the venues taking part in the festival and these can be found within the venues and also at Nottingham Tourism and Travel Centre.

Daniel Hughes, Area Manager for EMR said: “It’s a fantastic opportunity for East Midlands Railway to host the owls at Nottingham Train Station this September to support with the Nottingham Ale Trail.

“As a key transport hub, we’re keen to encourage people to utilise public transport to access the city whilst providing a lasting impression on those using the station as a doorway into the city centre.”

Lucy Stanford, Direction of Operations at Nottingham Business Improvement District (BID) commented: “The Wise Owl Walk was a huge hit last year with people visiting from all across the region to see the beautifully hand painted owls and to take part in the interactive trail, which created an experience for visitors as they discovered all the great offerings we have here in Nottingham city centre. Therefore, we are delighted to have this opportunity with East Midlands Railway to showcase the unique sculptures again, which will make a colourful display for those arriving at the train station for The Nottingham Ale Trail amongst other things.”