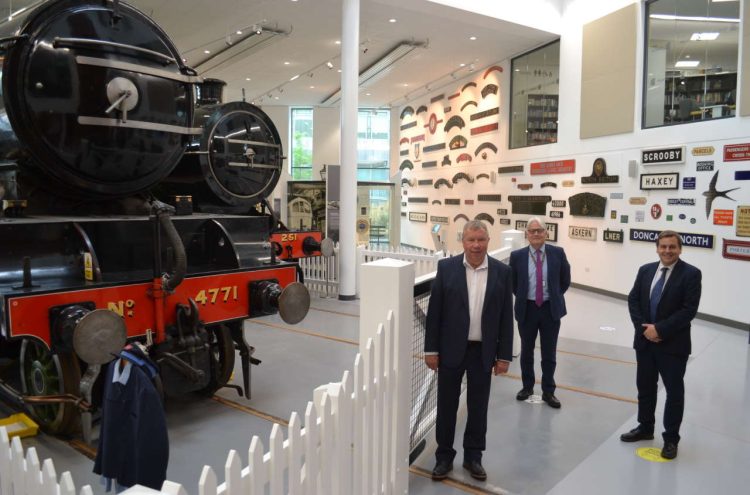 An extraordinary new Rail Heritage Centre has been opened this week, located inside Doncaster’s state-of-the-art Danum Gallery, Library and Museum

Doncaster built Green Arrow and No. 251 locomotives make a striking focus for the centre, with both steam locomotives loaned from the National Railway Museum.

There are also plenty of rail-related exhibits and historical treasures to see from the Doncaster Grammar School Railway Collection, some of which have never been displayed before. With displays being regularly changed as different exhibits take place, it’s going to be a really wonderful facility for those with a passion for rail.

The Doncaster Grammar School Railway Collection was initially started in 1948 by pupil Tony Peart as part of the school’s Railway Society. Over the years Tony also became the curator of the collection up until his death in 2006, creating an astonishing and varied collection of thousands of rail artefacts most of which are focused on Doncaster’s incredible railway heritage.

Centre stage is given to the nameplates of locomotives designed by Sir Nigel Gresley and built at Doncaster such as ‘Cock O’ The North’ and ’Silver King’. Being hidden away for 70 years in a tower in what has now become Hall Cross Academy. The Collection is now, at last, being celebrated for all to see for the first time at the Doncaster Rail Heritage Centre.

To celebrate the opening day, Trustees of the Doncaster Grammar School Railway Collection have also released a new book called: ‘Treasures in the Tower’ which tells the story of the remarkable collection which has been built up over many decades. The book is available to buy from the Danum Gallery, Library and Museum shop and also the Doncaster Tourist Information Centre.

Damian Allen, Chief Executive of Doncaster Council, who was present at the event, said: “It is fantastic to welcome to Danum Gallery, Library and Museum the people who have contributed to making this astounding Rail Heritage Centre possible. It’s been a true partnership effort. Having two locomotives back home in Doncaster where they were built, complemented by an incredible array of rail-related exhibits and artefacts is just incredible. Together they showcase the golden age of steam and the vital role Doncaster played in making it happen.”

Cllr Nigel Ball, Cabinet Member for Public Health, Leisure, Culture and Planning, said: “Danum Gallery, Library and Museum is a wonderful community asset and visitor attraction in Doncaster town centre. It features the restored frontage of the former Doncaster High School for Girls and many of its original features. It has modern libraries and educational facilities, fascinating museums, a great art gallery and, of course, a marvellous Rail Heritage Centre. The building offers visitors a remarkable experience as they are taken on a journey through Doncaster’s rich and varied history. It’s a place for people to learn and importantly enjoy. I thank everyone who contributed to this amazing Rail Heritage Centre.”

Chris Barron, representing the Trustees of the Grammar School collection, commented: “This is the result of a long, but successful, collaboration. The Trustees are delighted with the outstanding support we have received from the Council. We look forward to working alongside Heritage staff to make the collection better known and appreciated by local people and visitors from all over the world.”

Andrew McLean, Head Curator and Assistant Director at the National Railway Museum said: “The National Railway Museum is proud to partner with Doncaster Council to loan two of the most iconic of all Doncaster-built locomotives to add to the rail heritage centre’s rich and fascinating displays. By celebrating Doncaster’s important contribution to the railways, I hope future generations will be inspired to make their own mark in continuing the engineering legacy of this great town.” CrossCountry has announced that it has renewed its partnership with the National Railway Museum in York.