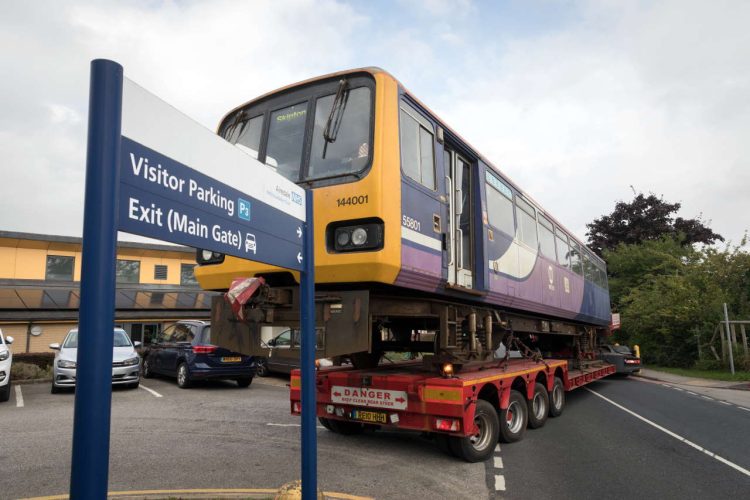 Airedale General Hospital has welcomed a Pacer train after winning the Department for Transport’s ‘Transform a Pacer’ competition.

The competition took place at the same time as the final phase of withdrawal for the unpopular Pacer trains from the Northern network and was designed to save the vehicles from being scrapped, as they could be used positively by the local community.

The West Yorkshire hospital intends to transform the Pacer and use it as a mixed-use, non-clinical space to offer support and respite site for families visiting the hospital. The facility will focus on helping children and families and people suffering with dementia and will bring an unusual communal space for patients to use whilst staying at the hospital.

Sunday the 5th of September saw the retired Pacer carriage, which weighs 19 tonnes, lowered into Airedale General Hospital by crane with a specially constructed site already prepared for its restoration.

Rolling stock company Porterbrook delivered the train to the Airdale NHS Foundation Trust following its lengthy service on the network since 1986 and travelling a massive three million miles on the tracks over those many years. The train was installed with support of Network Rail teams who handled the logistics of putting it into position.

This Pacer train marks the third and final of the retired vehicles to get re-purposed by community projects through the Department of Transports ‘Transform a Pacer’ competition which was based in the North of England. Other winners have seen vehicles delivered to a primary school in Bradford where it will be transformed into a new science lab and another pacer was sent to Huddersfield Station for mental health charity Platform 1 who will turn the carriage into an educational kitchen.

Following 30 years of service to communities in the north, the three retired Pacer trains can continue serving the public, bringing people together through these three inspiring and innovative community projects.

Rail Minister Chris Heaton Harris said: “It has been great to witness all three of these Pacer carriages taken off the tracks and into new homes to serve communities across the North.

“Instead of being a home for disgruntled commuters, this train will now have a new life bringing happiness and support to families visiting Airedale Hospital.”

Kirsty Randall, matron for the children’s ward said: “We’re really excited to have the Pacer train carriage on site, and can’t wait to start using it with our patients and their families.

“We’re planning on using the space for children and young people who need to be in hospital but not necessarily on the ward at all times.

“The space will give these children and young people a space which feels less medical which will really help our younger patients to have a more positive hospital experience.”

Mary Grant, CEO of Porterbrook said: “Our Pacer trains have connected communities across Yorkshire over many years. Now that they have left frontline passenger service, I am proud that one of these vehicles will have a new lease of life at Airedale Hospital.”