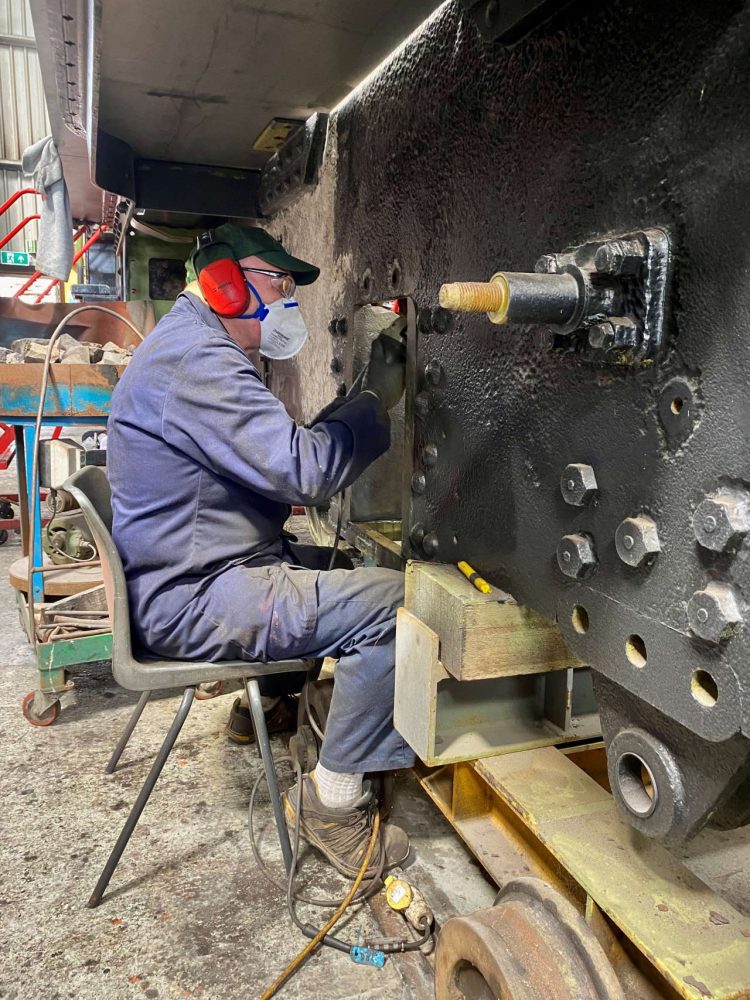 The 2874 Trust has sent RailAdvent an update on work taking place at Toddington on the Gloucestershire Warwickshire Railway.

Recently, restrictions on volunteers attending Toddington have been lifted, so it’s finally full steam ahead with their work programme.

Whilst numbers have been restricted, work has still been able to progress. Work has been halted whilst a seized piece of the frames was removed, even with a gas axe it would not budge, so a metal bracket has been ordered to allow the hydraulic press to better engage and hopefully the piece will be removed.

Funds were raised last December to complete work on the horn guides. The initial work has now started to prepare for the objective of fitting the axle boxes.

A small team has cleaned up the faces of the horns ready for horn grinding.

The sub-project to overhaul the axle boxes has progressed with them all being fully cleaned and parts needed to complete the work have been identified.

The trust needs 6 underkeeps due to some going missing when the locomotive was in storage. The team has secured two pony truck underkeeps from another loco group and 4 driving axle underkeeps have been ordered from Bridport Foundry. These are expected to be cast in the near future.

The castings have cost more than £1500 and will need some machining before being ready to be fitted.

The opportunity has been taken to have some valve bodies cast at the same time. The trust says it will be a while before they are needed, but the patterns were available so made sense to cast them as part of a bigger order.

The new top plates have also been ordered.

Another project being completed is work on the lubricating system for the axle boxes. Each axle box has a bracket fitted to the frames where oiling pipework is fitted, none of the brackets have survived in a usable condition, some were missing, some are badly corroded, and some have seen the use of a gas axe.

A new angle iron has been purchased, cut to size and is now being shaped into a new set of brackets.

The new drag box is now at the machinists as it needs to be perfectly smooth where it fits with the frames. Rivetting this into place will follow as soon as it is delivered to Toddington.