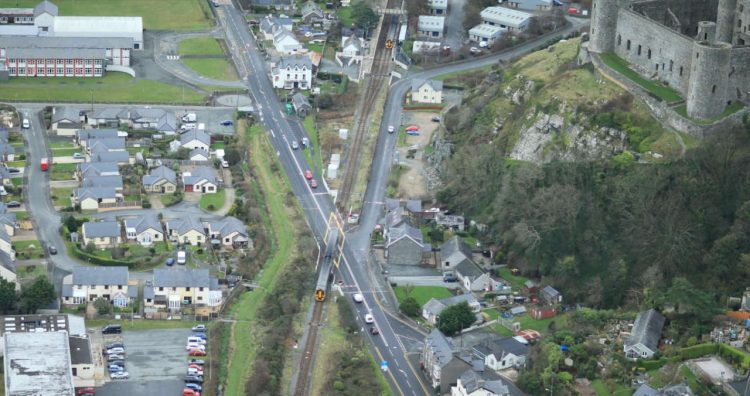 Paige Kelly is 9 years old and lives in the beautiful and historical seaside village of Harlech in Gwynedd.

The popular tourist destination is divided into two halves by the Cambrian Coast railway line, making it vital that level crossings are used correctly.

Children of the local Ysgol Tan-Y-Castell have learnt about the risks of the railway, this is very important due to the location of the Cambrian Coast line through the village which means that many of the young students need to use the crossing to get to and from school each day.

Paige does have good knowledge of rail safety, but despite this learned earlier this year that even the slightest distraction can put you in significant danger on a railway.

Paige remembered: “I was going to see my friends who live across the tracks. We were pushing our bikes up to the gate”

“My friends then went in the gate and then I went by. I went straight across.

“Then I saw the train, it was right there. I was so shocked and scared.

“I trashed the bike down and hid in the corner.

“I cried when I got across the other side and saw my dad.”

“I was distracted that day talking to my friends, and I forgot to stop, look and listen.”

Luckily, the driver of the train saw Paige with enough time to sound the horn and apply the emergency brake. Paige’s fast thinking to duck out of the way saved her life that day.

The driver was unable to stop the train for approximately 50 meters from Paige’s position at the crossing.

Paige was terrified by the ordeal. It also left the local community and her parents panic-stricken and thinking the worst.

Paige’s step dad Emmett, said: “You just think the worst, that the worst has happened to your kid and it’s every parent’s worst fear. You have thoughts going through your head that no parents want,”

“It’s wider than just Paige. I have five kids. One of them has Cerebral Palsy, and he uses a frame and a wheelchair from time to time and crosses the track.

“We are just trying to get the kids talking about how dangerous it [the railway] is here and getting them to understand.

“If other people learn from this incident, then something good will have come out of it.”

With over 1,000 level crossings throughout Wales, many of which are pedestrian crossings similar to the one in Harlech, it is vital to get the message across about staying vigilant whilst using crossings and following the rules.

Safety teams from both Network Rail and British Transport Police provide safety talks in schools throughout the country. Following Paige’s near-miss incident, the safety teams gave the pupils of Ysgol Tan-Y-Castell an extra session to reinforce the safety message.

Anwen Williams, Head Teacher at Ysgol Tan-Y-Castell, Harlech, said: “It is so important the children learn about railway safety. After the incident, the police and Network Rail visited and talked to every single year group about rail safety.

“They make our job very easy, and they are vital to helping us encourage the children to remember the safety rules.”

Philip Caldwell, level crossing manager at Network Rail, said: “We are so glad that Paige came away from this unharmed, but it goes to show how a split second decision near the railway can put your life at risk.

“Trains travel almost silently and if you are distracted, it will be too late before you notice the train upon you and survival after being hit by a train is, sadly, almost zero.

“Level crossing users should cross quickly and always follow the instructional signage, making sure to stop, look and listen.”

BTP Sergeant Ian McMahon said: “We see hundreds of people taking risks on and around the railway every year, resulting in tragic consequences or life-changing injuries. Thankfully, on this occasion Paige was lucky.

“We urge everyone to take extra care at level crossings and to always follow the signs.”

Alexia Course, Transport for Wales’ Director of Transport Operations, said: “The railway can be a dangerous place and it’s vital to take great care when using one of the many level crossings across the Wales and Borders network, including following the key instructions: stop, look and listen.

“We’re grateful for Paige sharing her story and hope that she is doing well. We’re continuing to work closely with our colleagues at Network Rail and the British Transport Police to spread the message of the importance of rail safety in schools and communities across our network.”

The Dalesman steam train is running once again this Thursday