New report shows that the building of HS2 will now support a massive 34,000 jobs 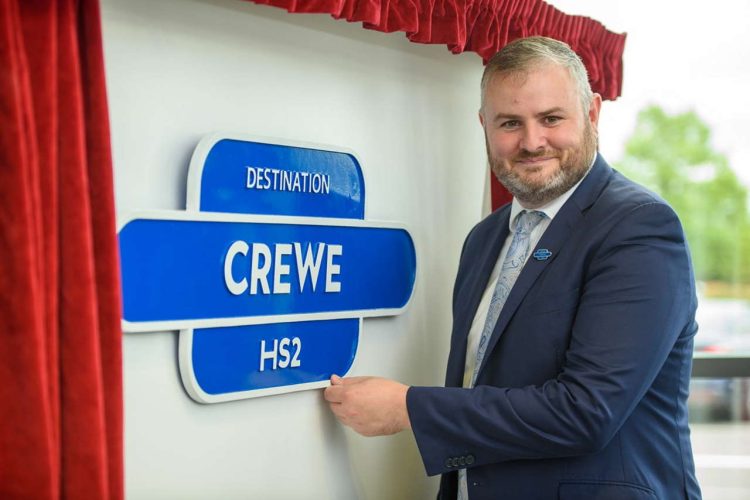 A new report has been released that says the construction of High Speed 2 will support up to 34,000 jobs.

The report has also revealed that 4,000 more jobs than initially forecast have been created due to the building of the vast project, and also 6,500 jobs will be supported for the building of the West Midlands to Crewe phase (Phase 2a) of the railway, which is 1,500 more than originally predicted.

A new plaque at Crewe station was revealed by HS2 Minister Andrew Stephenson on Tuesday, the 24th of August.

The minister welcomed the increase in jobs as part of the Government’s Plan for Jobs which aims to bring employment to the North of England.

The news of increased jobs for the region was also positively received by Crewe and Nantwich MP. Dr. Kieran Mullan along with Cheshire East Council’s Deputy Leader Cllr Craig Browne, who welcomed Mr Stephenson at Crewe station, and also the Managing Director of the West Coast Partnership Development, Caroline Donaldson.

The report has revealed the big picture of the vital role that HS2 will bring in helping young people and unemployed people back into work following the pandemic. The report also brings attention to HS2’s total workforce for Phase One and 2a which will eventually peak with around 26,500 people for the next two years with a continuous demand for labour of 23,600 to 26,500 people to date until 2025/2026.

The creation of 2,000 apprenticeships has also been committed for HS2, with 650 already created. The report also shows that the labour and skills forecasting data from another report reveals that job opportunities will be accessible throughout a large range of sectors. Construction partners for HS2 are currently recruiting for hundreds of positions and those seeking work are recommended to check regularly on HS2’s online jobs board which gets a daily update.

The news of an increase in jobs has arrived at the right time as the UK begins to build back better and with HS2 being a critical component in the post-pandemic economic recovery with more than 16,000 jobs currently supported and more than 2,000 business’s providing work of which 70% are small-medium enterprises and with more than 97% based in the UK.

During his visit, the HS2 Minister was treated to a tour of Crewe station whilst Network Rail also gave details about the upgrade projects over the next decade that will prepare the station for HS2 services. The projects will bring better connectivity and reliability for passengers and freight services that run through Crewe, the work will require large improvements to track, signalling equipment and will also mean extending station platforms.

Andrew Stephenson, HS2 Minister, said: “HS2 will be a spark for new jobs and economic growth as we build back better from the Covid-19 pandemic.

“I’m delighted to announce that the project is now expected to support thousands more jobs than previously forecast. The section from Birmingham-Crewe alone is due to deliver 6,500 jobs, creating valuable new opportunities and an enduring skills legacy.”

Kate Myers, HS2’s Head of Skills, Employment and Education said: “This new report shows that there are thousands more jobs to come and that trend will continue as HS2 extends north.

“Our focus on investing in young people and upskilling communities along the route of the new railway will ensure that HS2 leaves a lasting skills legacy.”

Nantwich MP Dr Kieran Mullan, said: ‘’HS2 is going to bring jobs and opportunities to Crewe, building on our existing status as a rail industry hub. Moving intercity journeys to the new line will free up space to improve local services which is the priority for residents in Cheshire.

Caroline Donaldson, Managing Director for the West Coast Partnership Development, said: “This is great news for the region, and we are proud to support HS2’s role in the post pandemic recovery.

“The visit today highlights the welcome boost for Crewe and the West Midlands presenting a great opportunity for the area as we build back better.”

Chris Pye, infrastructure director for Network Rail’s north west route, said: “Today’s been a brilliant opportunity to talk about Crewe’s exciting future railway upgrades that will get the north ready for HS2 services.

“The work planned to be delivered by Network Rail and HS2 Ltd will not only transform the local rail network by boosting reliability and connectivity for passengers and freight trains through Crewe, but it will also deliver knock-on economic benefits through new jobs and investment opportunities.”

Philip Cox, Chief Executive of the Cheshire and Warrington Local Enterprise Partnership, said: “The arrival of HS2 means that Crewe has a very bright future.

“HS2 represents the sort of step change that only comes along once in a generation. It will have a transformational impact and make Crewe one of the best business locations in the country. As the key hub into the North West, it will create jobs across all parts of the economy to follow on from those generated during the construction phase.”

Dalesman steam train set to run this Thursday, passing through Ribblehead on its way to Carlisle