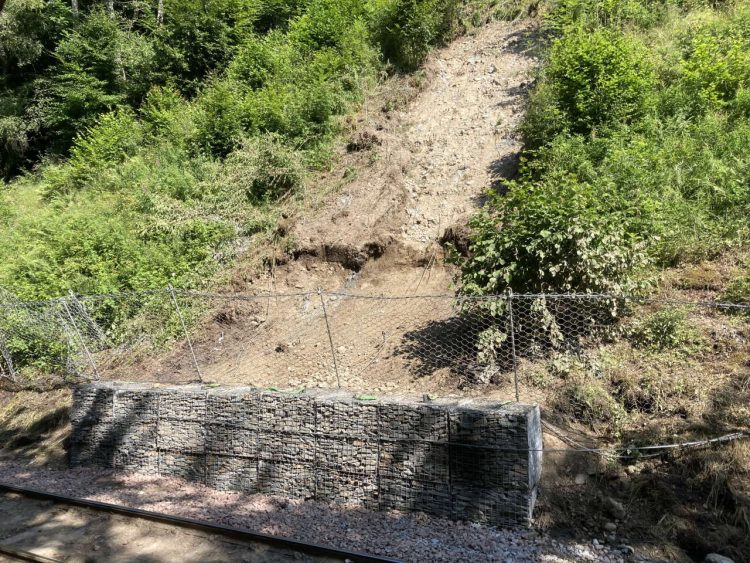 Two weeks of work has been undertaken by Network Rail to complete the project with over 50 tonnes of mud and plant life being removed from the tracks and slope following the land movement.

Heavy rain on Sunday, the 11th of July 2021, saw water run onto the railway from third-party land, causing the landslip.

Specialist engineers were called in quickly to assess the damage and clear the track, allowing the line to re-open with a restricted speed the very next day.

A wall of gabion baskets has been put in place at the base of the slope, which will provide stability and protect the area from further issues.

A tensioned catch fence had been positioned on the slope previous to the landslip and did a great job at keeping back a larger volume of mud and vegetation from getting onto the track and was also repaired and reinstated during the work.

Network Rail also installed Erosion netting which will prevent any further washing out and encourage vegetation to grow with the roots binding the top layer of earth, preventing further deterioration to the surface of the slope.

Speed restrictions on the Highland Mainline from Pitlochry and Blair Atholl have now been put back to usual speeds, with services returning to normal.

The team are still collaborating with stakeholders who will establish that the third party drainage problems are dealt with as they were the initial cause of the land movement.

Network Rail is funding massive improvements to the condition of earthworks and drainage systems on Scotland’s Railway network.

More than £120 million has been invested in earthworks, drainage and bridge strengthening schemes in Scotland from 2014 to 2019.

From 2019 to 2024 £149 million pounds will be put into this area and include more than £30 million to modernise the networks ability to resist extreme rainfall, £13 million will be directed to known flood sites and £25 million will be placed into vegetation management projects.

Thomas Podger, Network Rail’s project manager for the works, said: “We have an extensive programme of proactive works to prevent these types of incidents from occurring, but increasingly, extreme weather events are having a significant impact on our railway.

“When this incident happened, our team responded quickly to initially ensure the safety of the cutting and get the railway cleared and re-opened to minimise disruption for passengers. We then followed up with additional works to stabilise and protect the cutting and improve the drainage in the area to reduce the risk from heavy rainfall in the future.” The brand new purpose-built engineering depot saw the unveiling of a plaque to celebrate its official opening on...