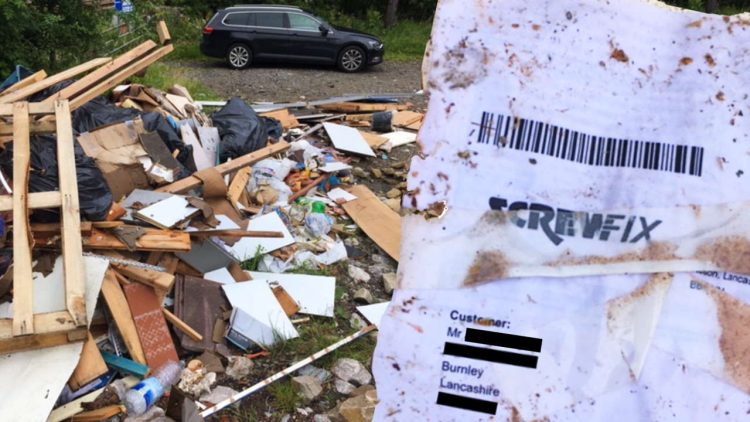 A fly-tipper was caught bang to rights after dumping his DIY rubbish from a project at his own home on railway property in Lancashire after leaving his home address amongst his illegally disposed debris which included floor tiles, planks of wood and even a bed frame.

The fly-tipper left large piles of rubbish at a track access point in the Burnley area.

The access points must remain clear throughout an entire day as engineers may need to carry out essential works at any time. The access points are also essential to provide emergency access and the blocking of these points puts lives at risk.

The name and address were found on an invoice for building materials in amongst the rubbish he dumped and as soon as this information was discovered the matter was forwarded on to the British Transport Police who quickly followed up with court proceedings.

The court case took place at Burnley Magistrates Court in May 2021 with the fly-tipper pleading not guilty but was later found to be guilty by a judge following a trial on July 14th 2021.

The guilty party received a fine of £1,000 and was also ordered to compensate and pay court costs to Network Rail, which brought the grand total up to £3,000.

Ian Croucher, maintenance protection coordinator, said: “I hope this case shows a strong message that Network Rail will do everything it can to track down illegal fly-tippers and work with the British Transport Police to bring them to justice.

“Not only is illegally dumping waste like this hazardous to our staff who have to clear it up and a risk to railway passengers, it’s also a blight on the environment. It costs millions of pounds of taxpayers’ money to clear waste like this every year – money which should be spent improving journeys for passengers.”

Chief Inspector Dave Rams, from British Transport Police, said: “Fly-tipping costs the railway millions of pounds each year which could be invested in the railway network. This offender’s actions have cost him dearly and we hope this acts as a deterrent to others who are thinking of doing the same thing.”