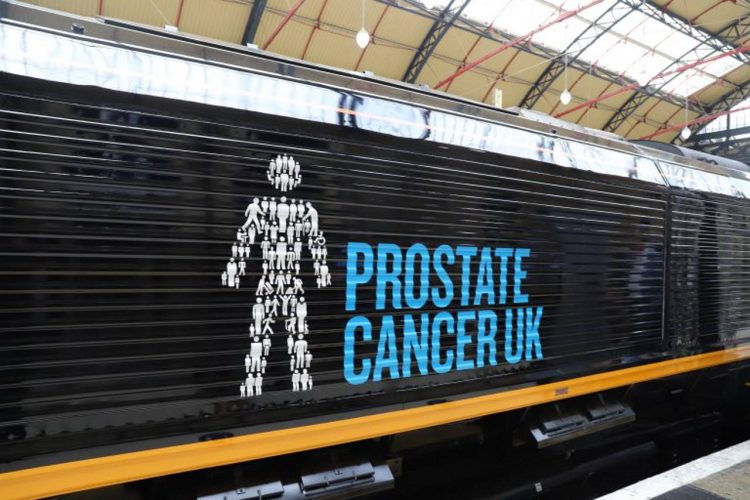 Class 66 66769’s new name of ‘League Managers Association’ comes along with a special livery featuring Prostate Cancer UK’s well-known logo ‘the Man of Men’ and was unveiled at Victoria Station in London.

Following the naming ceremony, guests were treated to a special charter service hauled by locomotive through the Kent countryside.

GB Railfreight (GBRf) will also be running a 4-day rail tour which will support Prostate Cancer UK. The tour will be called ‘GBRf 2021’ and is the third 4-day rail tour organised by the rail freight company, with the two previous charity charters raising more than £250,000.

A partnership between GB Railfreight and Prostate Cancer UK was announced in January 2020 and all fund-raising ventures carried out by GBRf being in support of the UK-wide organisation and its mission to beat prostate cancer.

Since 2020 GBRf have been working with its corporate partner, the League Managers Association (LMA) which is the trade union for Premier League, EFL and national team managers in the English FA and provides access to football managers with high-level leadership and elite performance experts along with recognisable football personalities.

John Smith, CEO, GB Railfreight: “Our specially painted Class 66 locomotive will be raising vital awareness around the issue of prostate cancer by showcasing the iconic Man of Men logo as it travels across the country on the railway. This has only been made possible by the strong collaboration GBRf has with its two brilliant partners, Prostate Cancer UK and the League Managers Association.”

Angela Culhane, CEO, Prostate Cancer UK: “We are delighted the iconic Prostate Cancer UK “Man of Men” logo will be displayed proudly on the Class 66 locomotive together with the League Managers Association name plate.

“This is an excellent initiative, which not only raises funds for vital research into better tests and treatments, it will also spark conversations about prostate cancer – a disease affecting one in eight men in the UK, and one in four black men. We are very pleased to be working with two of our fantastic partners on this life saving journey and thank them for their ongoing support.”

LMA, Chief Executive, Richard Bevan said: “The LMA is privileged to be involved with the unveiling of this newly named Class 66 locomotive in collaboration with our Corporate Partner GB Railfreight and longstanding Charity Partner Prostate Cancer UK. We are excited to be able to raise awareness of our fantastic partnerships with both of these organisations and to continue to develop the partnerships into the upcoming season.”

LMA Chairman Howard Wilkinson said “On behalf of the LMA and all the association’s members, I would like to thank GB Railfreight for unveiling this locomotive in honour of its partnership with both the LMA and Prostate Cancer UK. We are extremely proud to be partners with these two fantastic organisations.” Alstom has signed a €1.8 billion contract with Norske Tog to supply up to 200 Coradia Nordic regional...

17 Alstom Coradia Stream trains to be built for DB Regio