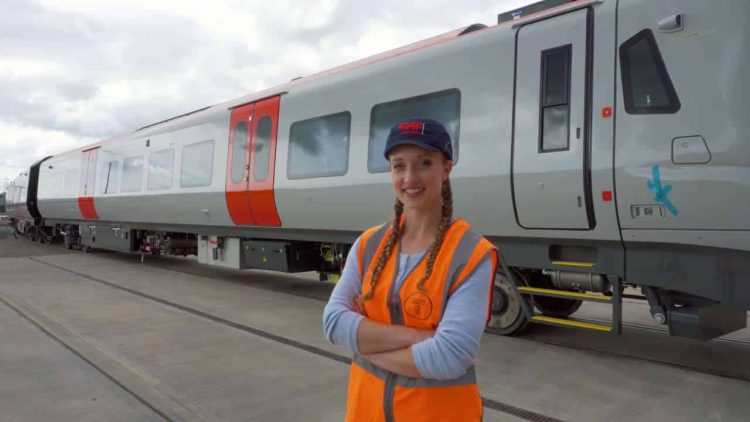 The Magnificent Train Journey competition was a once in a generation opportunity for primary school children to come up with names for 148 Transport for Wales trains.

The names needed to be inspired by Wales and the borders such as place names, landmarks and mythical figures.

Along with the name, children needed to explain why they chose the name in a creative way such as poetry, a story or a picture.

Submissions were made as either a class or a whole school.

The competition gave teachers and schools an interactive learning pack which was inspired by topics such as sustainability and transport, old and new trains, stories from around Wales and the borders, and places to visit on the train.

Five judging panels were chosen for each region, and they selected the winning entries plus an overall winner for each of the regional areas.

After the initial judging round, a final judging panel including Cbeebies presenter Grace Webb from CBeebies Grace’s Amazing Machines chose the overall winners for the best poem, short story and picture.

The competition has over 110 winners from schools across Wales and the borders, with the names being added to the new trains next year as they arrive into service. Some of the winning names are ‘Llyn Barfog’, ‘Deva Victrix’ and ‘Ruabon Ruby Rooster’.

Other names for the new trains include Barmouth Bridge, Taliesin, Harlech Castle, Gelert, and Cambrian Coast. The full list can be found by clicking here.

Grace Webb, presenter of Grace’s Amazing Machines on CBeebies, said: “It’s been wonderful to see so many children getting involved and the creativity they have shown has been fantastic.

“It was a very difficult decision to choose the overall winner because the standard was so high, and they can all be very proud of the work they have put in.

“It’s been a pleasure to judge the competition and I’m looking forward to seeing the new trains, with their brilliant names, out on the network.”

Megan Roseblade, TfW project lead and a former teacher, said: “On behalf of everyone at TfW I would like to thank all of the children who took the time to enter the competition, we’ve been blown away by the quality of entries we received.

“This was a once-in-a-generation opportunity to name the new trains which will help to transform the Wales and Borders network and there has been a fantastic response to the challenge.

“We also wanted to inspire the children to learn more about transport, climate change, sustainability and their local and national history and we’re delighted with the success of the competition.” Train operator Great Western Railway has operated the first electric-only train to and from South Wales.