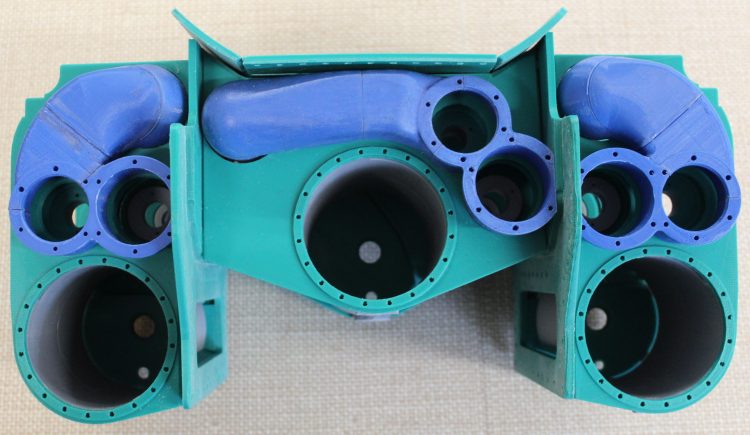 The P2 Steam Locomotive Company has announced their latest club, The Cylinder Manufacturing Club, to help raise funds towards the construction of their new build London and North Eastern Railway (LNER) P2 No.2007 “Prince of Wales”.

The Company, set up by the A1 Steam Locomotive Trust, has now accepted a quote from Howco Group PLC, which will see them fabricate the new cylinder block with William Cook Cast Products Ltd providing steel castings for the new block.

All going well, the Company could see the delivery of this block as soon as Spring 2022.

Howco Group PLC are a specialist in using high-grade alloy metals, making them a great choice for the job.

The engineering team have dedicated a lot of time to designing the cylinder block arrangement to ensure the design will be suitable for 2007.

Work started with the old LNER drawings for the original six engines, followed by redesigning and development work.

Various analysis tests have been carried out to assess the design, all of which have gone successful.

Now the P2 Steam Locomotive Company is looking to raise £250,000 through The Cylinder Manufacturing Club.

Members will be entitled to the following benefits:

Chairman for The A1 Steam Locomotive Trust Steve Davies MBE commented: “Placing the order for the fabrication of the redesigned and improved cylinder block for our new Gresley class P2 No. 2007 Prince of Wales is a very significant milestone in the project to build Britain’s most powerful steam locomotive. Our engineering team has done a magnificent job converting the original class P2 monobloc – or one-piece – casting into a welded fabrication, and we are delighted to announce that Howco Group Plc has agreed to manufacture the new cylinder block using steel castings supplied by our principal sponsor William Cook Cast Products Ltd, with delivery scheduled for spring 2022.

“In spite of the impact of COVID-19, we are pleased with the support the project to build Britain’s most powerful steam locomotive has received since its launch over seven years ago with over £3.4m spent and almost £4m donated to-date of the estimated £5m required. We have launched The Cylinder Manufacturing Club to raise £250,000 from 250 generous supporters each donating £1,000 – if you would like to see a new Gresley class P2 sooner rather than later, I would encourage potential supporters to get on-board The Cylinder Manufacturing Club.”

Plant Director of Howco Group PLC in Irvine, Iain Frater commented: “Howco Irvine is proud to be selected as the manufacturer of the cylinder block for the new Gresley class P2 steam locomotive No. 2007 Prince of Wales. The association of the class P2s with Scotland, and the innovation in Sir Nigel Gresley’s original design, make this an appropriate and interesting project for our company to be associated with. We look forward to delivering this product early in 2022 and seeing the new locomotive enter service soon after.” Significant milestone reached in construction of Mikado steam locomotive No. 2007 Prince of Wales