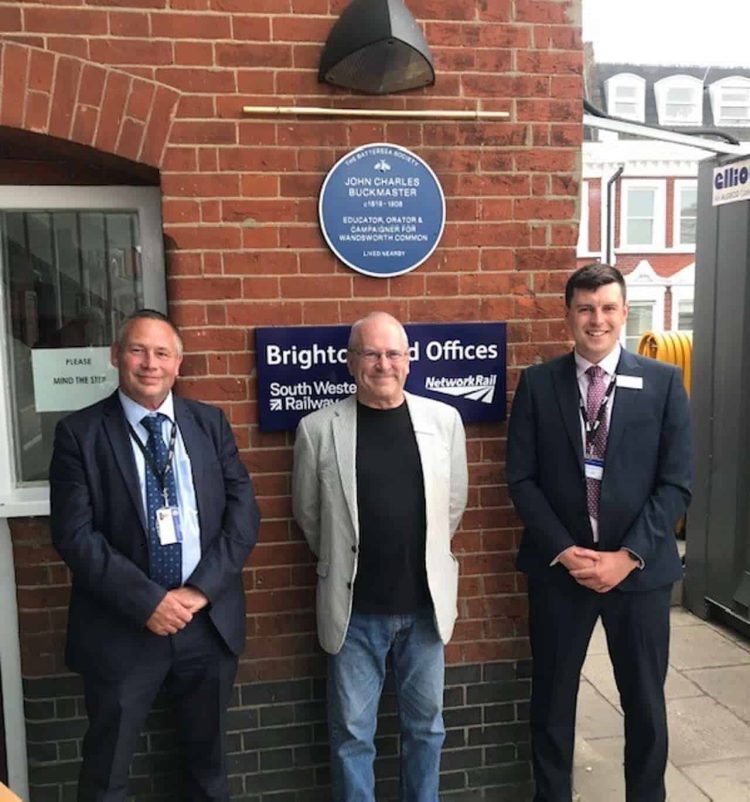 A ceremony has taken place at Clapham Junction station to unveil a blue plaque to commemorate John Charles Buckmaster who fought a campaign to save Wandsworth Common from developers.

Blue plaques link people of the past with the buildings of the present. Currently run by English Heritage, the scheme was started in 1866.

Mr Buckmaster lived near to the current station site and is described on the plaque as an “educator, orator and campaigner for Wandsworth Common”

The ceremony to unveil the plaque was attended by Network Rail’s chair Sir Peter Hendy, Lucy Mowatt, the deputy mayor of Wandsworth, along with Viscount Buckmaster, the great, great-grandson of John Charles Buckmaster.

William Robertson, Clapham Junction station manager, said “It was an honour to be part of a ceremony honouring a local legend who did so much to keep green spaces open for everyone to enjoy today.

“It was also amazing to hear speeches from Sir Peter and Viscount Buckmaster who paid tribute to the hard work and dedication of John Charles Buckmaster.”

Lucy Mowatt, the deputy mayor of Wandsworth said: “It was a privilege to welcome everyone to the unveiling of a Blue Plaque to John Charles Buckmaster. It was highly appropriate as it was 150 years almost to the day that the Wandsworth Common Act was passed in 1871, saving the green space of Wandsworth Common for the people of Battersea and Wandsworth in perpetuity.”

The COP26 summit is taking place at the end of this month and train operator Transpennine Express are...