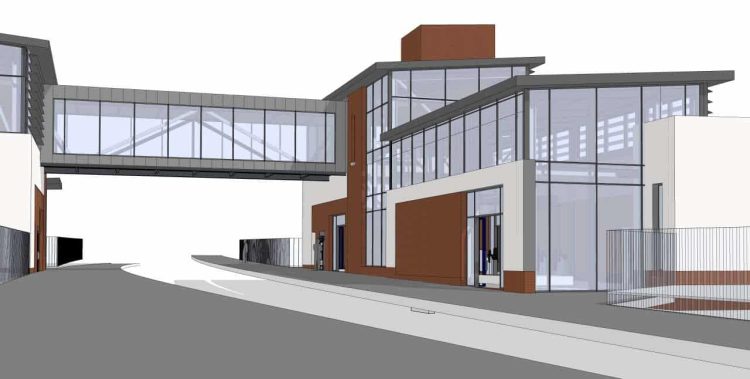 Planning is well underway in a project to relocate Hairmyres Station as Scotlands Railway, South Lanarkshire Council and the Strathclyde Partnership for Transport agree on funding and development for an expanded transport interchange as part of the East Kilbride Enhancement Project.

Hairmyres Station will be moving to a new site off Redwood Avenue which is around 600 metres west of its current location, with work set to commence in 2024 on the new 18-acre site, with completion expected by the end of summer 2024.

Network Rail, Transport Scotland, South Lanarkshire Council and the Strathclyde Partnership for Transport will undertake the huge project creating a vital transport interchange that will feature a park and ride facility.

The expansion of Hairmyres Station will also provide electric vehicle charging points along with active travel improvements and a brand new bus interchange.

Scottish Government plans to de-carbonise its rail passenger operations by 2035 by giving more capacity on routes and using greener and quieter trains.

The project is set to transform public transport choice which is hoped to get people off of the roads and onto the rails which in turn will reduce carbon emissions.

Graeme Dey, Transport Minister, said: “The East Kilbride Enhancements Project is a central part of our commitment to decarbonise Scotland’s Railway by 2035 and is clear evidence that, together with our industry partners, we are delivering on this as early as possible.

“When completed, this project will offer transformative public transport options that will encourage more people out of their cars and onto trains. Improving the passenger experience is pivotal to help drive a shift from road to rail and that is why the new Hairmyres station will be a welcome boost to passengers and the local economy alike.

“As we begin to emerge from the pandemic, electrification projects such as East Kilbride show we can build back not only better but greener too.”

“The East Kilbride Enhancements Project will help to transform travel on this route, delivering new and upgraded station facilities, more services and more reliable journeys. The project is also vital to our ambitions to decarbonise rail in Scotland by 2035.

“The redevelopment of Hairmyres is a fantastic opportunity to improve the passenger experience and demonstrates what can be achieved when we work collaboratively with our partners.”

Councillor John Anderson, chair of South Lanarkshire Council’s Community and Enterprise Committee, said: “This really is a great move and a win, win for everyone. Anything that improves access to a greater range of public transport options and promotes sustainable commuting opportunities is to be applauded.

“Active travel is high on the council’s agenda. The facilities that this new station will not only provide everyone with more environmentally friendly modes of transport, but also bring more accessible retail opportunities to the wider community.”

Councillor Dr Martin Bartos, SPT chair, said: “SPT is proud to be funding and working alongside partners in helping deliver a new transport interchange and strategic park and ride at the relocated Hairmyres station.

“We are committed to ensuring a fully integrated approach for improving bus and rail connections as well as delivering good walking and cycling connections to nearby towns.

“This is also a fantastic example of partners working collaboratively to improve public transport and which will transform the station into a modern and vibrant integrated transport hub, offering more sustainable travel choices for people.”