Caledonian Railway welcome Thumpers 1132 and 1128 from the Dartmoor Railway 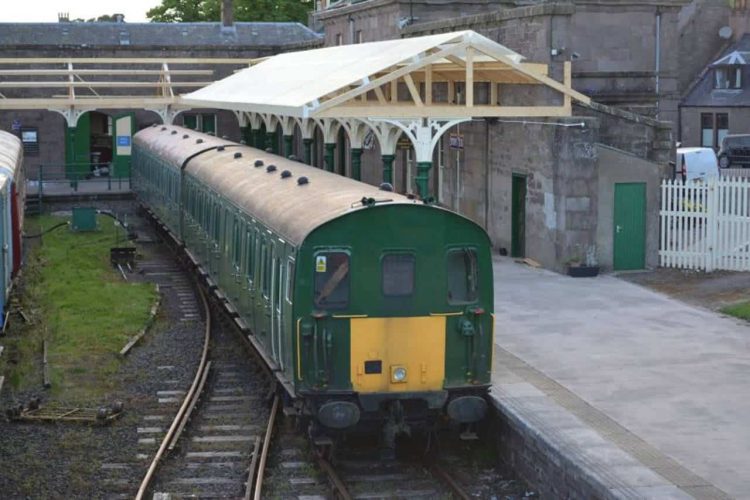 Exciting times for the Caledonian Railway as Thumpers 1132 and 1128 arrived by road following a huge journey of more than 560 miles from Meldon on the Dartmoor Railway in Devon to Brechin, Angus.

The Caledonian Railway has purchased the pair of 3 car units and plan for 1132 to go into service.

1128, which is currently unrestored, will be taking part in another power project taking place with Aberdeen University.

Thumpers, as they are fondly known as, or Southern Region Class 201 to 207, are best known for their iconic thumping sound and are well-loved by rail enthusiasts.

The DEMU’s operated in the south of England and the Southern Region, so for a pair to be working in Scotland is a really exciting opportunity for rail enthusiasts to see these special units and hear their unique sound.

The Thumpers were built from 1957 to 1962 with this pair being part of the third batch of units, being built in 1962 as three-car sets which ran from Reading to Salisbury along with other routes within Berkshire which earned the third batch the name of ‘Berkshire Sets’ the Thumpers ran services in the southern region for 47 years until they all were withdrawn by Southern in 2004.

The Caledonian Railway is a 4-mile railway that is totally run by volunteers and situated in the historic town of Brechin.

The railway is currently closed, however they usually operate both heritage steam and diesel locomotives and opens on weekends throughout the summer with all funds being reinvested into the railway’s ongoing restoration and preservation projects.

Steam returns to Llangollen as steam locomotive 3802 goes on test