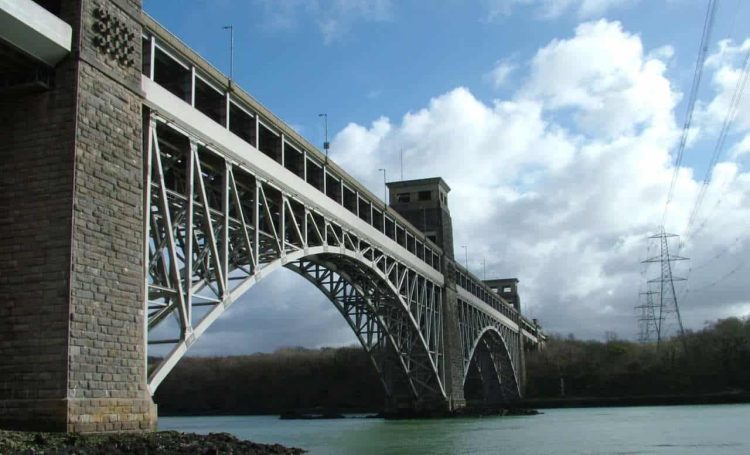 Plans for the refurbishment of Britannia Bridge across the Menai Strait in Wales have been amended after a pair of peregrine falcons were found to be nesting there.

Peregrine falcons are a protected bird, with around 1,500 pairs in the UK. They were spotted by a member of the public flying to and from the middle tower on the Grade II listed bridge.

Completed in 1850 by Robert Stephenson, Britannia Bridge is 460 metres long and has 3 land towers.

Restoration work had been planned by Network Rail on all three towers of the bridge which links Anglesey and mainland Wales.

With the birds using the tower, Network Rail teamed up with Ecological Consultants, Whitcher Wildlife Ltd for some advice on how to best protect the peregrine falcons.

After discussions with Natural Resources Wales and the ecologist work on the central tower will be postponed until later in the year with work continuing on the Anglesey and Caernarfon towers.

“After a few visits to the bridge, it soon became clear that a solitary peregrine falcon was roosting, preening and hunting from the central tower”, James Campbell, Ecological Consultant at Whitcher Wildlife Ltd said.

“It was displaying the typical field signs of an adult male, defending the nesting site and tending to feed the female peregrine falcon on the nest.

“Falcons are usually found nesting in high-up places, like cliff tops or tall buildings, but this is the first time I have been called out to monitor these magnificent and rare birds nesting in the tower of a bridge.

“We are working closely with Network Rail to continue to monitor the birds over the next few months, with work on the central tower now paused until the young peregrines have fledged the nest, later in the year”

Network Rail project manager, Peter Caulfield, said: “As with all of our projects, we are very conscious of the impact our work might have on the local environment and we are trying to keep any disruption to a minimum.

“Given the national importance of the birds, we can’t risk disturbing them, so we have postponed the work on the central Britannia tower until later in the year.”

“This is an iconic bridge which provides a vital road and rail link between Anglesey and mainland Wales. Once complete, our work on the towers will ensure the bridge remains safe and reliable, helping to preserve it for years to come.”