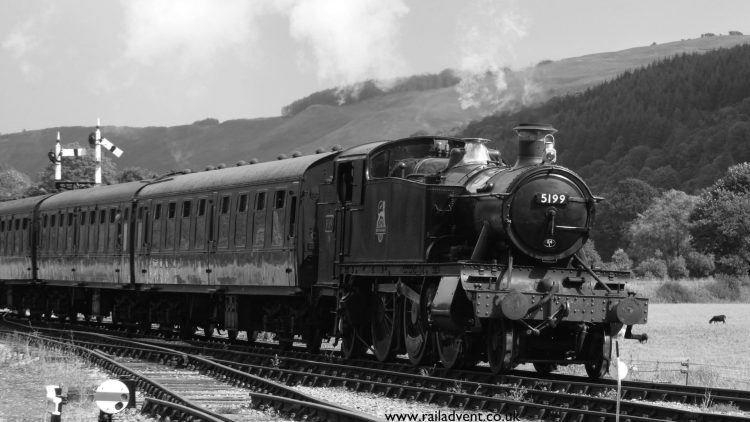 The West Somerset Railway has announced that they have hired in GWR 5101 steam locomotive No. 5199 ahead of being able to run steam services again in 2021.

5199 will move from the Llangollen Railway to the West Somerset Railway before Christmas on the 17th December 2020.

The Llangollen Railway is aware of the move from North Wales, and 5199 will steam at the West Somerset Railway for a minimum of 35 days in the hire period.

For 25 years, the West Somerset Railway has played host to ‘sister’ locomotive No. 3160 which was restored at Minehead but has since left the railway for overhaul at the South Devon Railway.

Jonathan Jones Pratt, WSR PLC Chairman, told RailAdvent: “We are very much looking forward to welcoming 5199 back to the WSR, having a large Prairie on the line is very much well suited and will fit in well with our other home engines.”

“We are particularly looking forward to welcoming the group back again who have always made the WSR feel very welcome across a very valued working relationship.   I am sure this news will be appreciated with all our staff and volunteers as it shows the WSR is getting back to operating again!   The important mile stone recognition as we have worked through 2020’s challenges.”

GWR locomotive 5199 was completed at Swindon Works in December 1934 to the design of C B Collett as a rebuild of the 3101 class by Churchward. 5199 spent most of its life working in Birmingham on commuter trains before moving to Gloucester in the early 1960s. It didn’t spend long here before being withdrawn and sent to Woodhams Scrapyard at Barry.

After spending 22 years at Woodhams Scrapyard the locomotive was purchased by the Great Western Steam Locomotive Group and was moved to the Gloucestershire Warwickshire Railway in 1985. The Llangollen Railway welcomed the locomotive in 1988.

Major work being completed in Whitby to protect railway from landslip