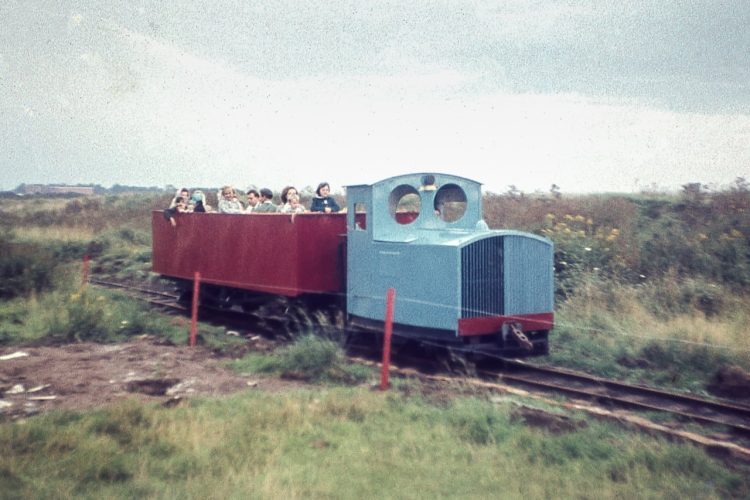 The 60th Anniversary year of the Lincolnshire Coast Light Railway has seen the discovery of some previously unseen photographs of the line in operation at its original site at Humberston, south of Cleethorpes.

The discovery was made during the UK’s first Coronavirus lockdown after a clear out of the cupboards at the Cleethorpes Coast Light Railway.

This then prompted volunteers at the Lincolnshire Coast Light Railway to search for and find previously unseen photos of the Cleethorpes line when it was known as the Cleethorpes Miniature Railway.

Now, the news of the discovery of even more photos from the early days of the LCLR has surfaced.

These date back to the 27th August 1960 and are colour slides of when the first train left Humberston North Sea Lane for Humberston Beach, with one carriage and a single Simplex diesel locomotive.

One of the founding supporters of the Lincolnshire Coast Light Railway, Mike Swift, was prompted by the publication of the old photos to look for his colour slides of the opening day. These were only shown on occasional meetings after being stored at his home in Huddersfield.

Railway stations in the North benefit from £100k accessibility boost

Mike, therefore, intended to show the slides to LCLR volunteers in the summer of 2020, but cancelled the visit due to the Coronavirus pandemic.

However, Mike has passed the slides on to Dave Enefer, LCLR Photographer, who has enhanced the images and has posted them on the LCLR Historic Vehicles Trust website for volunteers to enjoy.

“You can almost scent the sea in the air and hear the shrieks of children playing on the beach from looking at Mike’s photos” said one.” The bridge over the stream at Beach station, the sound of the Simplex running along the rails, the shouts of ‘Train for the Beach’, the donkeys coming back to the field next to the railway every evening accompanied by Humberston’s ‘Donkey Girls’ – Mike’s photos are that nostalgic; they revive memories forgotten for nearly 60 years.

“For those of us – schoolboys at the time – who spent every weekend at the LCLR and every day of the school holidays running the trains, it was an idyll – how lucky we were. And how lucky we are that the LCLR is still with us, bigger and better than ever before, at its new home in the Skegness Water Leisure Park”. A new accessible footbridge has been opened in Cleethorpes to reconnect the town centre with the beachfront.