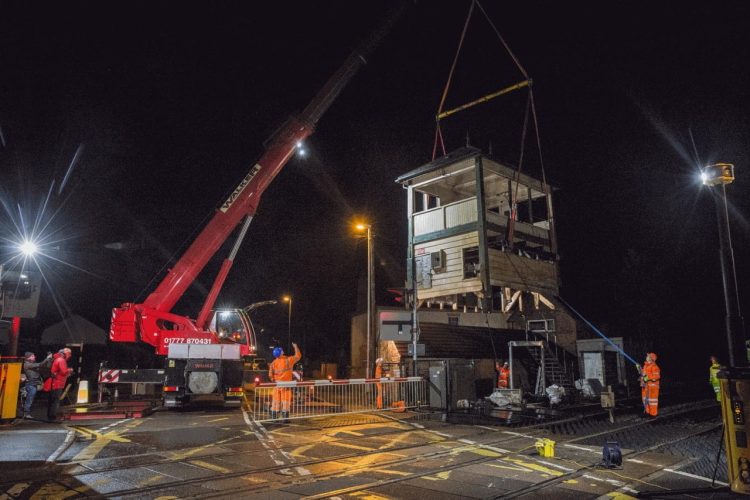 The former Lowdham signal box in Nottinghamshire has been moved overnight by Railway Support Services.

The new location was just 100m away, where the signal box will be restored and opened to the public.

The signal box controlled passing trains on the Nottingham to Lincoln line as well as working the level crossing gates until it became redundant and retired in 2016.

Andrew Goodman, managing director of RSS, commented: “We may have only moved the signal box a short distance, but it took David Moore, founder of Lowdham Railway Heritage, three years of detailed planning and negotiation with Network Rail to do it with professional advice from ourselves and consultant engineers Howard Ward Associates.

“Key to the move was getting possession of the line overnight, as well as closure of the road over the level crossing.  But before the possession was granted, a full risk assessment and detailed plans – in total running to some 130 pages – of how the move was to take place had to be approved by Network Rail.

“The logistics of the task were such that it didn’t matter whether the move was 200 yards or 200 miles – the challenges were much the same!”

“Eventually possession was given for the night of 24th/25th October from 00.30 (an hour later than scheduled) and 07.30.  However, as the clocks went back that night, the lost hour was regained!”  The task was completed with about half-an-hour to spare.

“These things are really nail-biting as until the job is actually completed, you are always wondering ‘what could possibly go wrong?’” comments Goodman.  “And of course, if there are any time-consuming snags, the end of the possession looms – if the line doesn’t reopen to traffic on time, there are considerable compensation costs payable to Network Rail.

“In the event, the move went very well thanks to detailed planning.  We didn’t even dislodge a slate from the signal box roof!

“The ‘box is now standing in its new position adjacent to Lowdham station, looking for all the world as if it has always been there!”