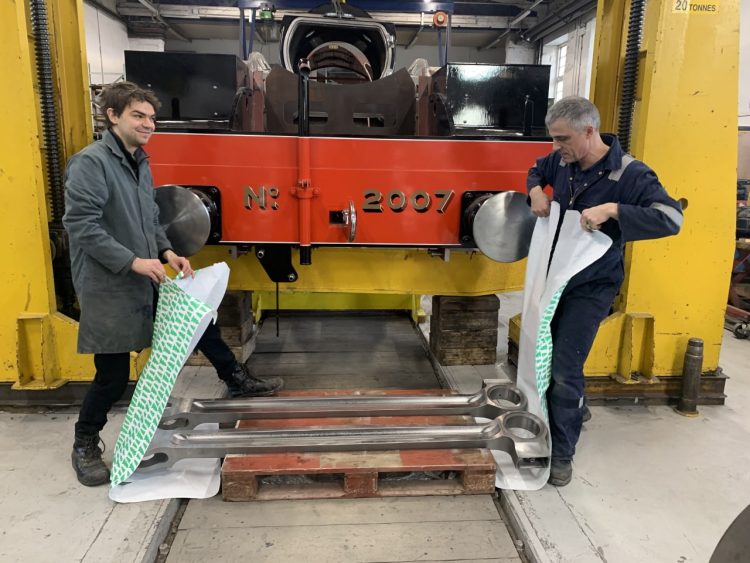 The P2 Steam Locomotive Company has announced that the second pair of machined coupling rods have been delivered to Darlington Locomotive Works for use on P2 No. 2007 Prince of Wales.

The delivery comes just seven years after the project was launched. The fundraising campaign that raised the initial target of £210,000 to pay for the manufacture of the heavy motion is making good progress too, with £175,000 already pledged by 175 supporters.

The P2 class were the most powerful passenger locomotives to operate in the UK. However, despite being designed by Sir Nigel Gresley, sadly the design was never fully developed and they were rebuilt by Edward Thompson into the A2 Class.

Despite the Coronavirus pandemic, progress on the Mikado locomotive has progressed rapidly. The locomotive has reached the condition where it is recognisable as a P2 and the structurally complete tender tank and wheelsets are now at Darlington.

Construction and assembly have continued on the boiler, wheelsets, tender frames, heavy motion, pipework and the electricals.

Fundraising has moved along well too. The ‘P2 for the price of a pint of beer a week’ has now attracted 940 supporters. The Dedicated Donation scheme has raised over £400,000 and the Boiler Club has now attracted 200 members of its 300 member target.

Over £2.5m has been spent on the project, however, there is still more than £3m to be raised of the £5m to complete the locomotive in the next three years.

Back in May 2018, a £181,000 order was placed with Stephenson Engineering Ltd in Atherton for the heavy motion. The order included the forging, machining and heat treatment of the nine heavy motion rods and the inside connecting rod assembly.

Mark Allatt, Trustee, The A1 Steam Locomotive Trust, commented: “We are delighted with the support the project to build Britain’s most powerful steam locomotive has received since its launch seven years ago. With over £2.5m spent and more than £3.0m donated to-date of the required £5m, we remain on-track for completion within three years. However, to maintain this progress we need to raise £700,000 per year and we are still seeking to recruit members of The Motion Club in order to complete the funding for the heavy motion as well as additional ‘P2 for the price of a pint of beer a week’ regular donors or covenantors.”

David Elliott, Director of Engineering, The A1 Steam Locomotive Trust, added: “The delivery of the second pair of coupling rods for Prince of Wales is a major step forward for the project, especially given the limitations of working during the COVID-19 pandemic. The machining of each rod by Stephenson (Engineering) takes around 100 hours. The next steps in the manufacture of the heavy motion include: the heat treatment of inside connecting rod and strap; machining of trailing connecting rods; delivery of new bronze rod bushes which will be pressed into intermediate coupling rods; and altering the design of the oil lids, commencing their machining and fitting to oil boxes.” The Class G5 Locomotive Company has announced an extra open day later this month, allowing the public to...