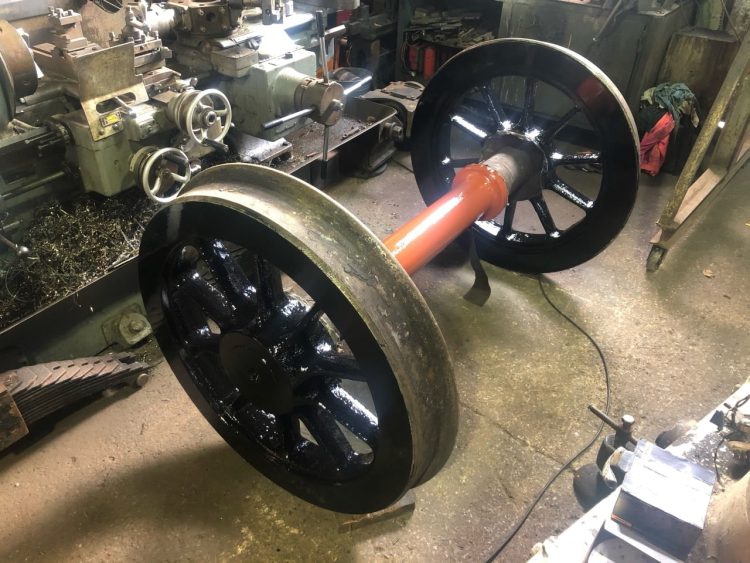 The 4709 Group has sent RailAdvent an update on the progress that has been made on building the tenth steam locomotive in the Churchward 47XX Class – No. 4709.

Work on the refurbishment of the pony truck is approaching completion at Leaky Finders. This means that the wheelset and axle boxes will soon be able to join the locomotive’s chassis.

Previously, the pony truck had been delivered to Leaky Finders from Tyseley as a kit of parts to allow the team to measure and assess the condition of the horn blocks.

Rory Edwards, from Leaky Finders, said: “The frame was put up onto our big machined fixture block, so that the horn blocks could be held in position with the barrel drifts and measurements between horns taken.”

The measurements then allowed Leaky Finders to set up the blocks in their horizontal borer and be skimmed. Once these were completed, the barrel drifts were replaced with fitted bolts, and whilst this was being completed, they took the opportunity to clean the remaining components.

Rory continued: “The pony truck was uplifted from Tyseley some months ago and we’ve been busy with it ever since. We’ve got a copy of every drawing in existence and engaged Bob Meanley to assist with additional assembly and component drawings, to ensure that the differences between donor 41XX pony truck and 4709’s are overcome and the new truck assembly is safe and performs as expected.”

Now nearing completion, the pony wheelset has been shot blasted, primed, undercoated and now is awaiting the first coats of paint.

Once this is completed, the pony truck will join the other wheelsets in storage, awaiting the next stage of the project.

Can you help the Romney Hythe and Dymchurch Railway steaming to 100 and beyond? The LMS Patriot Project has sent RailAdvent a further update on the work to build LMS Patriot 5551...