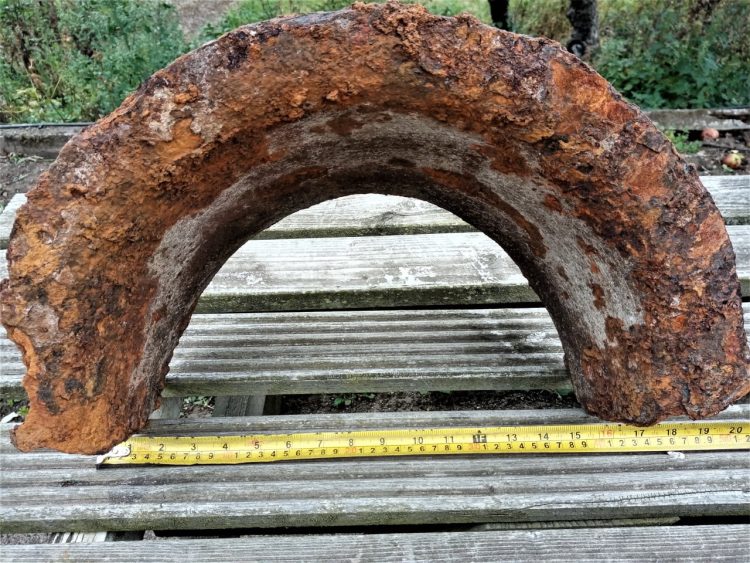 The Mid Norfolk Railway has made a mystery find at their County School station during maintenance work on the railway’s permissive footpath that runs alongside the track at the station.

Richard Cullen, the MNR’s volunteer Stationmaster, who is overseeing the restoration of this part of the railway said: “As some of our volunteers were carrying out routine maintenance of the railways Permissive footpath, they found a piece of metal buried.  After digging it out, it appeared to us, that we had found the firehole deflector plate from a steam locomotive.”

The firehole deflector plate is part of the firebox on a steam locomotive where the fireman shovels coal into the firebox that provides the heat for the boiler.

The mystery for the Mid Norfolk Railway, however, is how this came to be buried by the side of the railway near the station.

County School station was built by Great Eastern Railway in 1886 and served as a junction between the Dereham to Fakenham Line and the East Norfolk Railway’s Aylsham to Wroxham branch.

The station never had an engine shed, however, and also didn’t have any facilities to repair steam locomotives.

During January 1915, there was a collision of two Great Eastern Railway trains close to the station site, with both locomotives being damaged.  Richard and the volunteer team wonder, could this plate be a reminder of that accident?

The accident happened when a freight train from Wroxham collided with a passenger train from Fakenham; it only happened at slow speed, so only some wagons, coaches and the locomotives were damaged, no injuries were reported.

A damaged buffer, believed to be from the tender of one of the locomotives, is on display at the station museum. The deflector plate will be added to this growing museum once conservation work is complete.

County School station is currently a visitor centre and small museum with a display about the Norfolk County School that gave the station its unusual name. At the time of writing, the museum is closed to the public due to the coronavirus pandemic, but it is planned to reopen in 2021.

Richard Cullen said: “We at the railway would be delighted to hear from anybody who might have some knowledge on this unusual find and of course we are always on the lookout for volunteers to join us, to help with the restoration of the railway at this wonderful station.”