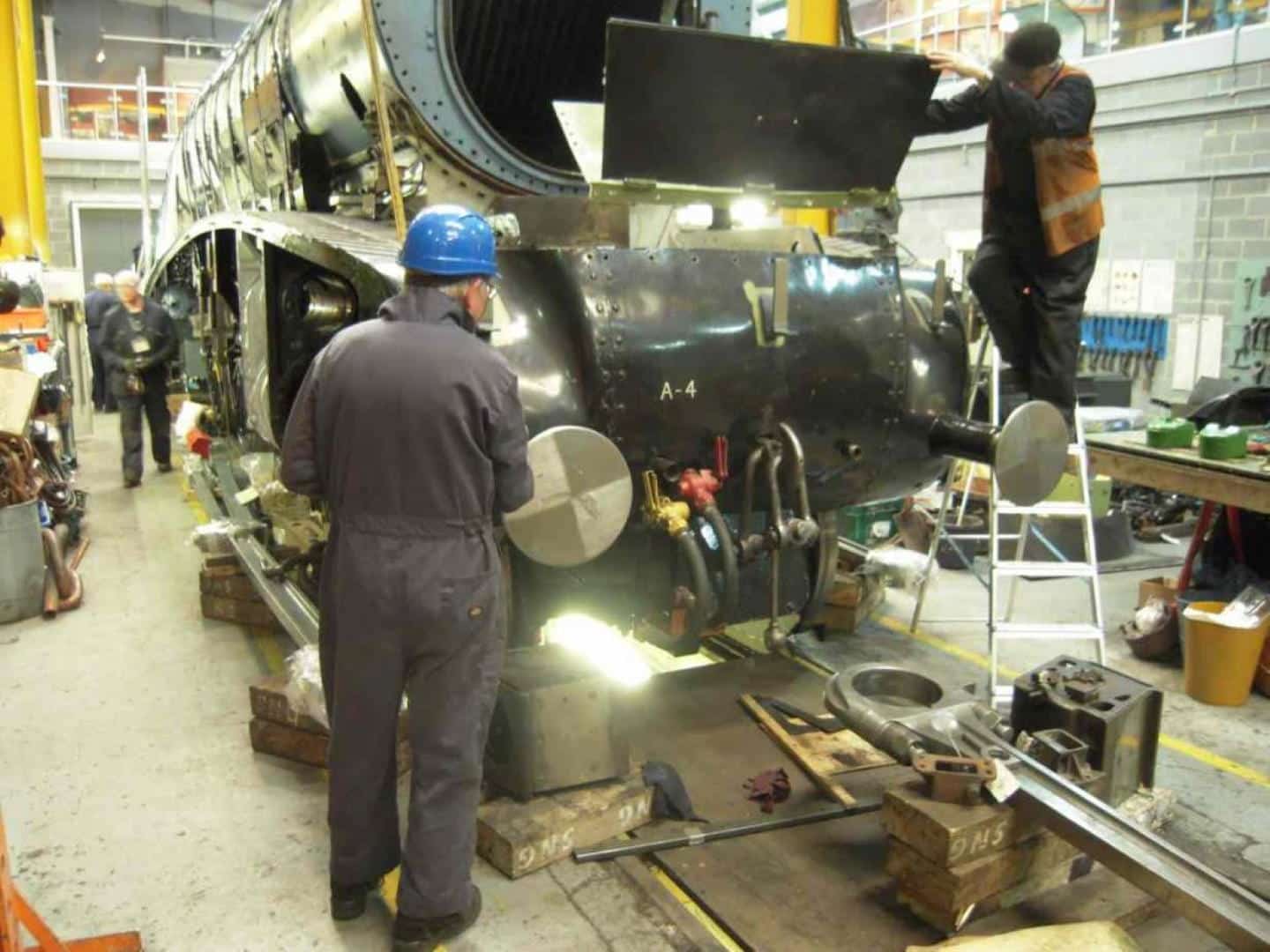 Cladding around the firebox is in the process of being repaired and refitted. With 60009 “Union South Africa” being stored at the National Railway Museum York, the team have checked out how 60009’s cladding has been formed to help with rebuilding 60007’s.

Some sections have been subjected to corrosion and require wasted sections being cut out and replaced.

Much welding has been done to refit the streamlining at the front of “Sir Nigel Gresley”, with the team now considering to replace rather than repair some sections. Following this, the team have reattached the lower cod’s mouth door.

Before fitting the three new steam pipes, of which two are completed currently, and chimney casting, some corroded studs have been replaced.

The frame for the Cartazzi truck has been painted. A contractor has been selected to overhaul the Cartazzi springs. Two spare Cartazzi rubber spring bottom plates will be used, with replacements to be made at some point.

The pattern for Cartazzi Spenser boxes has been loaned to the Trust to make two replacement ones following two being loaned for use on classmate 60009 “Union of South Africa”. The contractor has received the brass block and drawing to produce the new Cartazzi bronze.

Tests have been carried out on return cranks welds and machined square holes. Securing bolts for the new valve guide need machining before the reamed guide can be reattached. One steam chest valve cover is undergoing repairs, with the rest being trial fitted and measurements checked.

Setting up the piston valve heads has involved checking the exhaust ports distances. Refitting of the gudgeon pins has been completed. The overhauled reverser reach rod has been reattached and appears to function correctly. Away from York, overhauling the motion’s knuckle pins is nearing completion, with only some final machining work needed.

The newly fitted reverser reach rod has a switch attached to allow the On-Train Monitoring Recorder (OTMR) to detect which direction 60007 is running in. Following repairs to the top of tender’s tank top, the team have trial fitted the position for the Global System for Mobile Communications – Railway (GSMR) radio aerial and produced a new seal for the aerial. Repairs have been made to the Automatic Warning System (AWS) bell, with a spare one also being repaired.

Repairs have been made to the top front part of the tender’s tank top, to align each plate to allow the streamlining to sit correctly. Riveting the coal door frame is currently in process. A junior volunteer has repaired the catch for the coal door. Fixing the lower vestibule support brackets has been delayed due to issues with the clearance wedges.

The gangway upper support brackets require attention, with the upper support spring covers now painted in gloss topcoat, with the floorplate now fitted.The new box to house the battery is under construction by a volunteer off site.

The fitting has begun of the new bushes for the dragbox safety link pinholes, with the left side completed so far. Water filler and air supply pipes are now fixed in place, along with the left-hand side reservoir and smaller tank.