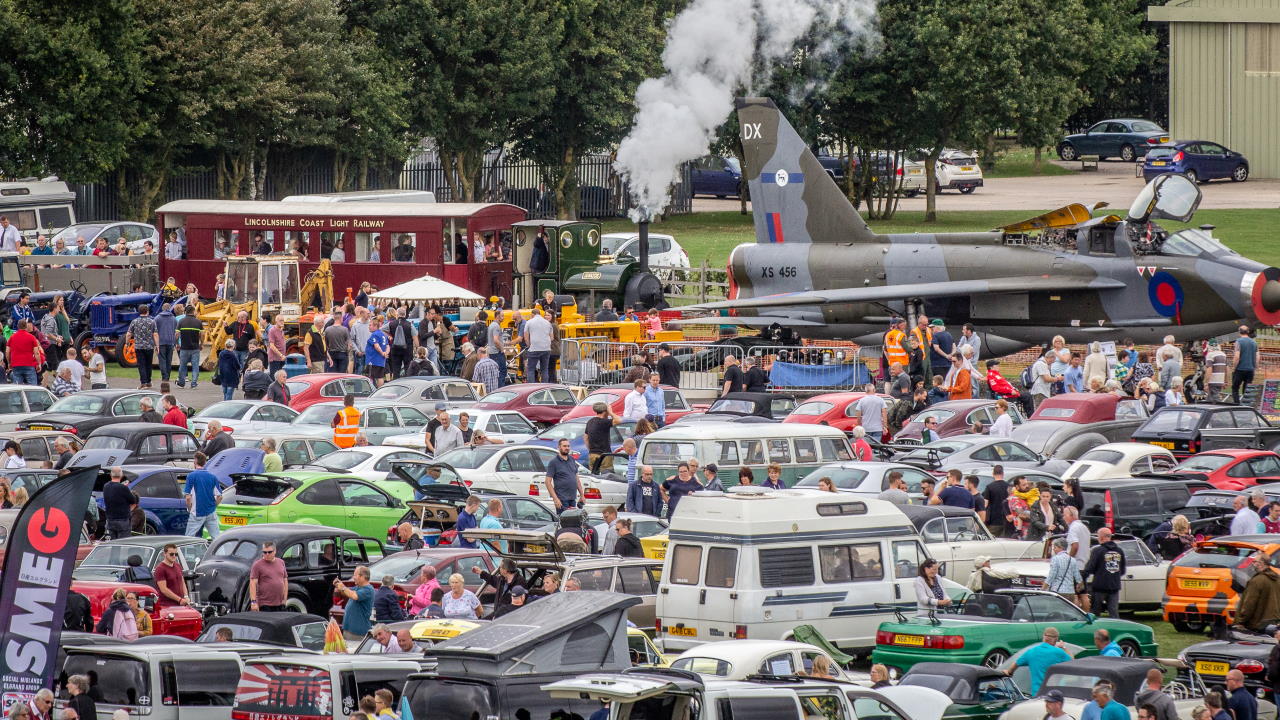 It was a “sparkling, steaming, soaraway success” was the organisers’ description of this year’s fifth successful Skegness Classic Wheels Show.

The show attracted around 500 vehicles when it was held on Sunday, 15th September 2019, on Skegness Aerodrome, next to the Lincolnshire Coast Light Railway in the Skegness Water Leisure Park, this was twice the numbers that attended the 2018 show.

At least six thousand pounds was raised for the Skegness Sea Scouts, the town’s lifeboat station and the Lincolnshire Air Ambulance.

So many visitors arrived that entrance wristbands ran out and an emergency rubber stamp had to be used instead.

The helicopter flights over Skegness were full throughout the day and the crowds were able to admire the many restored classic cars, trucks, motorcycles and other wheeled classics.

The classic cars also included Rolls Royce, Bentley, Austin, Riley and BSA, among others. A full line up of classic British motorcycles, such as BSA, Norton, Matchless, Triumph and Vincent appeared alongside such 1960s classics as the Honda 175.

Among the commercial vehicles on display was a selection of beautifully restored Karrier lorries, which the Water Leisure Park’s owners, Ellis Bros (Contractors) Ltd used when setting up their business in Skegness more than half a century ago.

Specially made trophies were presented by the Mayor of Skegness, assisted by the Mayoral Consort, Louise Saxon, on a stage provided by East Lindsey’s community radio station, County Linx Radio. The winners were:

Another attraction for many was the aircraft  XS456,  English Electric Lightning T5, which is under restoration by volunteers.

“The show becomes more and more popular every year.  Lincolnshire’s passion for classic forms of transport has helped us raise thousands of pounds for local charities, divided between Skegness Sea Scouts, Skegness Lifeboat Station, the Lincolnshire Air Ambulance and from the fares for the train rides, to also help the Railway’s Historic Vehicles Trust with their work of restoration of the county’s unique narrow gauge railway heritage..

“For us it was a sparkling, steaming, soaraway success and we’re already starting work on planning next year’s event, on Sunday 20th September 2020, which we hope to make even bigger and better”.

The Mayor, Cllr. Mark Dannatt, who spent the day at the show, said:

“It means a lot to Skegness to have this fantastic event on our doorstep, making people aware of our heritage. It’s great value and one of the best shows of its type in the country”