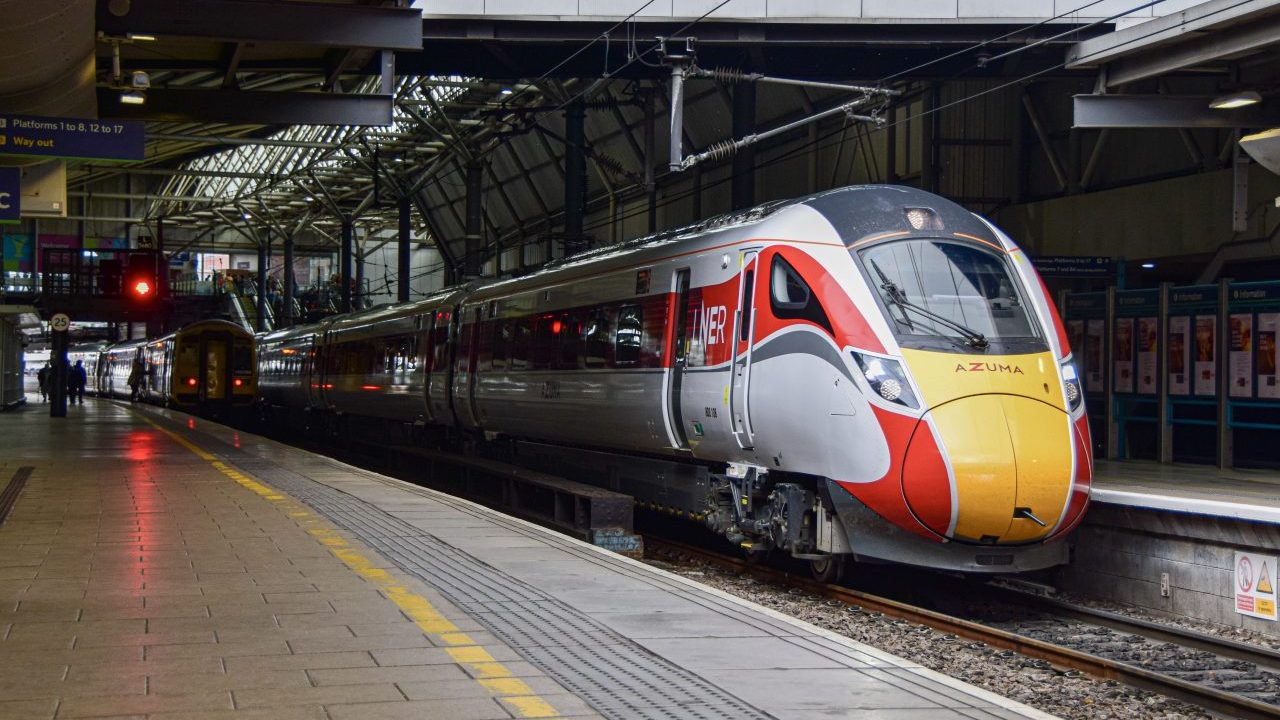 Whilst going from Leeds to Wakefield Westgate, I took notes of various things about the Class 800.

Below are my notes, first impressions to arriving into my destination and also my thoughts on the trains from an enthusiasts point of view.

**Please note – this article is completely opinion based, everyone is entitled to their own**

Initial Impressions of the Class 800 ‘Azuma’

I have seen these trains at various locations on the National Network for quite a while now. When first seeing these trains in the plain white colour they carried whilst in testing, I wasn’t attracted in any way to these trains however now liveries have been emerging on the units, they don’t look as boring now.

We have seen LNER and their red stripe livery appearing more common on the Azumas every day. We have also seen Transpennine Express with their Nova 1 (Class 802) trains carrying the ‘stained glass’ livery which I personally think is by far the best livery for these units.

When I was arriving into Leeds on my train, I spotted a very clean 800102 arriving alongside me which would form the 13:45 departure to London which I would board.

When up close with the 800, the outside of the train was immaculate considering this had just travelled up the ECML from London.

Upon boarding the train for the first time, I was blown away with how bright the interior was. I took my seat at a table and started taking notes.

First of all, I was happy with the reasonable amount of leg room there was, plenty of room to make yourself comfy for a long distance journey, The seat reservation signs are in good positions and are clear to understand and read from the perspective of a member of the public in a rush to find their seat. The announcements sounded roughly every 5 minutes which is a good thing as people are constantly boarding the train.

Finally, the last positive for this section is the fact there is a window at every seat which makes the journey a lot more pleasant so you always have the scenery to look at whilst speeding along. An issue I do have with these trains is the seats; they aren’t the comfiest to sit on, however, they weren’t the worst I’ve experienced, when travelling on a long journey, this could be an issue. Finally, the positions of the plug sockets aren’t in a great position, I would have very much liked to have seen them at the side of your seat as they most commonly are found instead of under the seats.

Setting off from Leeds

When setting off from Leeds, the departure was very smooth and I wasn’t aware we were moving until I glanced out of the window. Going over the points outside of Leeds, the train was shaking more than I expected it to, was thrown about a bit in the seat.

During the journey, which was done on a warm sunny day, the air con certainly did its justice in keeping the carriage at a reasonably cool temperature. The journey was also very quiet meaning you can get some peace and quiet or if you were doing work on-the-go, you would be able to concentrate.

However, after about 5-10 minutes, the seats became quite uncomfortable and I was thankful to be getting off at Wakefield. Also, it is quite noticeable when the train is accelerating or braking as I was thrown backwards and forwards in my seat; if you have something on the table infront of you or the one on the back of another seat, I found things often started sliding about.

Overall verdict from an enthusiast’s point of view

Overall, out of 10, I would rate the Azumas 5/10. The quality of the ride whilst on the move is good however as I said, the acceleration and brake applications are severely noticeable and the seats are also not comfortable for a 15-minute journey, so I wouldn’t want to experience a long distance journey.

Personally, no matter how much of this ‘modern technology’ is crammed into one of these, there is no replacing the classic Class 43 HSTs. The HSTs have been the backbone of the major railway lines such as the Great Western mainline and the East Coast Mainline for 43 years; they have comfortable seats, good ride quality and they have good acceleration and braking, not over the top. LNER and various companies can claim that they have faster acceleration but that really shouldn’t matter, and in my eyes, it really doesn’t. Electric trains are bound to have faster acceleration over diesel however ‘cutting journey times’ is a myth. The top speed of our railways is 125mph and that isn’t set to change any time soon so just because a train can reach 125 before another one can shouldn’t be something to hype about. I am fully aware people say “times are changing” and “you’ve got to move on” and yes they are correct, but the Azumas have been badly designed and produced.

Yes, people will have different opinions to mine and thats fine, however, this is just my point of view. Feel free to comment below with your views of the Azumas/IETs.

LNER has announced that HST nameplates worn by Class 43 locomotives raised £41,000 for charity over the weekend...

Written by Bob Pixton, Main Line Operations Around Manchester and The MSW Electrification is a comprehensive record of the Great...