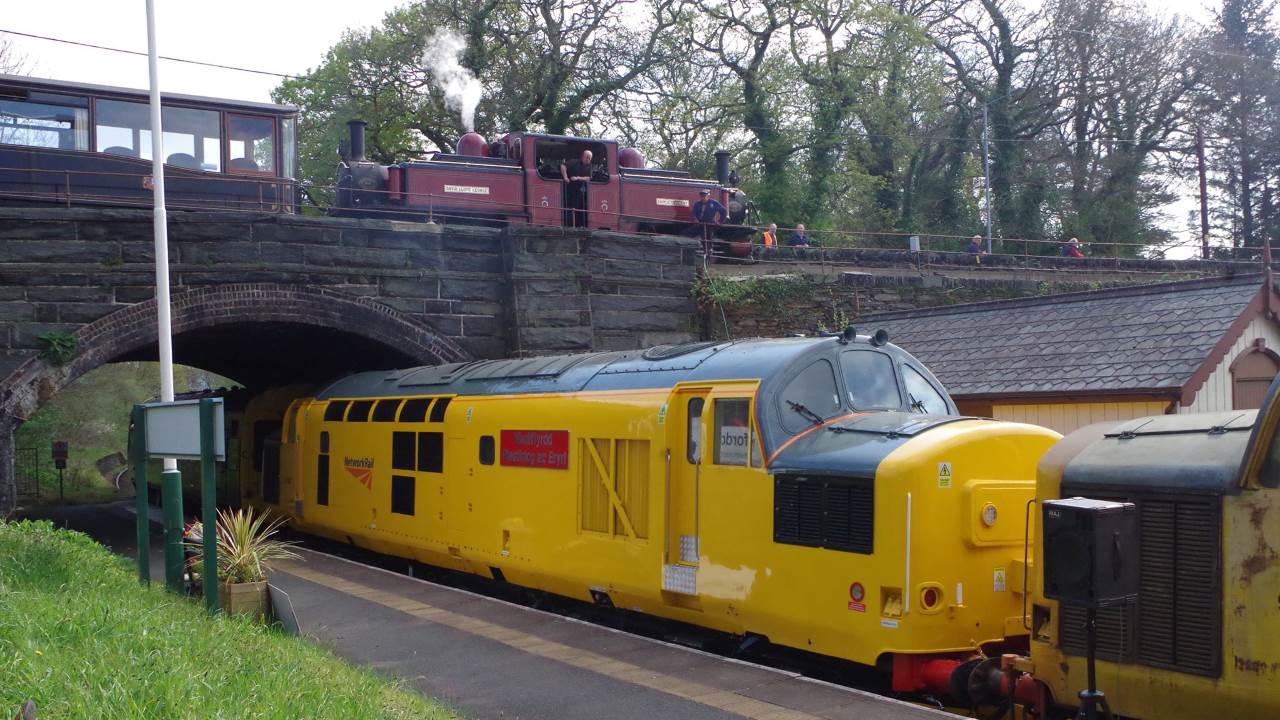 Network Rail has announced that one of their Class 97 locomotives have been named after the Ffestiniog and Welsh Highland Railways.

The nameplates for the Class 97 was unveiled at Minffordd railway station on Friday 12th April 2019.

The naming was to celebrate Network Rail Wales and Borders’ partnership with the Welsh heritage railway community.

The Ffestiniog Railway runs from Porthmadog to Blaenau Ffestiniog and is the oldest narrow gauge railway and the Welsh Highland Railway, which runs from Caernarfon to Porthmadog, is the UK’s longest heritage railway.

Representatives from Network Rail, Transport for Wales and other industry bodies attended the ceremony, with Dafydd Elis-Thomas, Assembly Member for Dwyfor Meirionnydd and Deputy Minister for Culture, Sport and Tourism unveiling the name.

Minffordd railway station was chosen for the naming ceremony, due to its location on the Cambrian Coast Line and close proximity to Ffestiniog and Welsh Highlands Railway.

The locomotive is part of a special fleet of three Class 97s that solely work on the Cambrian line.

The Cambrian line runs from Shrewsbury to Aberystwyth and Pwllheli and was the first line to trial the European Railway Traffic Management System (ERTMS), a system which sees traditional track-side signals replaced by an in-cab system.

This particular locomotive, which is compatible with ERTMS, has recently been in use for Rail-Head Treatment during the autumn season.

“We really value the relationship between Network Rail and the Ffestiniog & Welsh Highland Railways.

“We both have a strong focus on skills that will be needed in future. Every apprentice that works for Network Rail in Wales and Borders spends some time with our team and we also look to help attract applicants from North Wales to join the training schemes offered by both our companies. Also, a number of Network Rail staff use their volunteering allowance to work on our railway, which is really appreciated.”

“We are proud of our strong links with the Ffestiniog and Welsh Highland Railways and value its important role in increasing tourism on the Cambrian coast line.

“I was delighted to attend the naming ceremony, which was a fantastic opportunity to celebrate our partnerships with heritage railways and local stakeholders.”

“It was a great pleasure and honour to name this Class 97 locomotive Ffestiniog and Welsh Highland Railways.

“It celebrates the collaboration and new partnership between Network Rail, Transport for Wales and the heritage railways, and highlights this very important relationship between the railways. This co-operation will further support the railway transport network and enhance tourism opportunities in the area.”