This is an editorial article and contains personal views of the author. You are welcome to share your views in the comments below

I try not to get political, this piece is not a primary view of my intention or a party political statement, however never mind the uncertainty of Brexit what about our railways? An important area of vast investment and interest that made our country great.

So much talk of renationalising the system under a Labour government and with the Conservatives only just in power because of the DUP coalition who’s to say we could of have the railways back in public hands already!

Two main possibilities may unfold over the next few years, one I’m very much in favour of – may be due to nostalgic reasons but never the less wouldn’t it be great to see British Railways stock and livery taking you on your holiday or to work?

However, you can not ignore, the investment and upgrading of our network since the mid 90’s when privatisation began. Since then the number of rail journeys has increased by 117%, and overall satisfaction has also gained.

The UK is the second top satisfied rail service in the EU behind Finland at 76% whilst our soon distant European cousins like the Italians have one of the lowest customer satisfaction percentages at 36%.

France, Germany and other High-Speed Rail counties boasting a modern and fantastic system to envy but do supplement heavily their railways from public taxes  – its said France and Italy are heavily cutting back the HST operations and development due to the current financial climate across the EU, so could the UK be in a better position now, Tortoise and Hare scenario perhaps?

Statistics say passenger numbers have doubled in the UK especially for the towns and city regions. Some of the impacts of high fuel costs, road congestion and more centralised employment in the city has aided this increase. However, if you ask the RMT about passenger numbers they would say it was on the up way before privatisation.

So you could argue either way for the investment but you cannot ignore our ageing infrastructure built in the Victorian ages is in need of more money and guidance from a central source.

From my perspective, the disputes from Northern, Southern Railways, Mersey Rail and others do not help with the ‘success’ of privatisation. It’s widely known rail operators and maintainers are not making the operational funding they wish – look at the collapse of the East Coast and others on the brink of failure.

It’s such a fluid, complex and overwhelming situation divided into 100’s of independent areas that surely something is failing the passenger.

Years back if a route was in lack of stock or drivers they simply swapped or transferred the needed over to cover. Now, if you stand on the platform of Preston station the announcements on repetitive repeats declare a lack of drivers or trains hence such a service is now cancelled etc.

I recall one young woman doing manual announcements at this station giggling because so many platform alterations were taking place she lost her way and gave up!

Although Northern and TransPennine are owned by Arriva (DB) and First respectively they do not swap drivers or use each other’s stock to cover due to a separate ‘entity’ and I assume ORR permissions and paperwork.

The world of our railways and other industries has got far too complicated with do’s and don’t to even run a simple train from A to B! If Richard Trevick could only see what’s going on now he’d have second thoughts!

I feel for the person waiting for a service to arrive, and I feel for the ’forgotten’ lines that get abused with terminations and broken promises like my local line the South Fylde Line.

I feel the only advantage of this mess is the variety of old and new stock being used or leased to other operators provides great amusement and enjoyment to the enthusiast, and the chaos and arguing of politicians.

So if Labour were to run as a government the transport secretary would have to break any contacts with operators. This may please some current operators as if they were to do this now they’d face big penalties.

A new department would have to be set up to oversee the transition and future operation of the railway. They would liaise with stakeholders, shareholders and other parties who’d want compensation, and they would not let the government get away lightly.

Stakeholders share £1.2b out of the profits of our railways and this money also goes to the EU countries namely Germany and the Netherlands. In public hands, the fares could be cut up to 18% as this money would not be absorbed by Arriva, Abellio and others.

Its said issues with privatisation are filling the pocket of stakeholders. This is the case for any industry. In education or even the NHS, up to 20% will be ‘creamed off’ for investors and stakeholders.

So this is why the Labour party are currently working behind the scenes to prepare measures for these contracts that run for ten years – some are shorter, to legally end them within a short period.

As regards the maintenance and upgrade of the infrastructure this is already in public hands as Network Rail, if you remember it’s ’private’ version Railtrack this did not work or last very long thus this would not be an issue.

So bringing it all ’in house’ under public ownership is down to saying to these private members, “you can’t have it – it’s ours now!” and that’s the worst bit over.

After this, it would cost quite a sum to re-brand the rolling stock possibly still leased from existing companies and colour our stations to match. You then have the task of restructuring the routes thus impacting timetables and journey times.

It would take many years for the passenger to become familiar with the new system guaranteed to suffer teething problems and unforeseen transition issues. 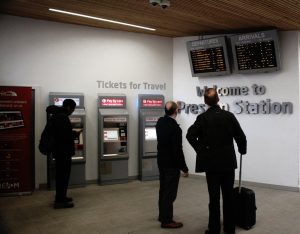 I’d like to say I really don’t think the passenger gives two hoots who run the railways, or what colour the train is as long as it turns up and does not cost the earth to ride! However, a recent survey says 76% of the public do want our railways back in the public domain.

Chris Grayling has recognised we need one office or agent to coordinate and run the railway as separate micromanaging a national operation does not work – is this a hint for nationalisation?

However, the government want to sell off assets and stations to raise £10b to invest in the current infrastructure – I suspect some will go to the HST2 budgets.

Either way, it’s a vast uncertain ground currently for the private operators and why would they want to invest big into the system when it could end in 10 years or less.

Our railways sadly are in a pickle. The current system is not working nor making the operators enthusiastic about its future. It’s good to see the GNRP and other government injections of cash occur across the network but I really feel its just ’sugar coating’ a railway that’s ultimately failing the passenger and costing the taxpayer far too much.

There will be some towns and cities who will benefit regardless of who runs the railways off the back of government cash injections, Liverpool and Blackpool for example but will take a generation to reap the rewards.

Our railways are like an overcrowded poorly managed train. It’s only the solid foundation that this current system relies on that keeping it rolling.

Gratitude to the honest hard working staff and volunteers across the country who believe in our railways and want it to work well. Hats off to the great designers, fabricators and builders of our stations and maintainers of track beds and rolling stock like the class 43’s, class 150, the 37’s, 56’s and let’s not forget our respect for the loyal 142 pacers.

However it pans out in the next ten years or so without you, our railways would be nothing.

What’s your theory, do you think a Public owned railway is for the UK’s best interest. Has Privatisation failed you? Comment below.