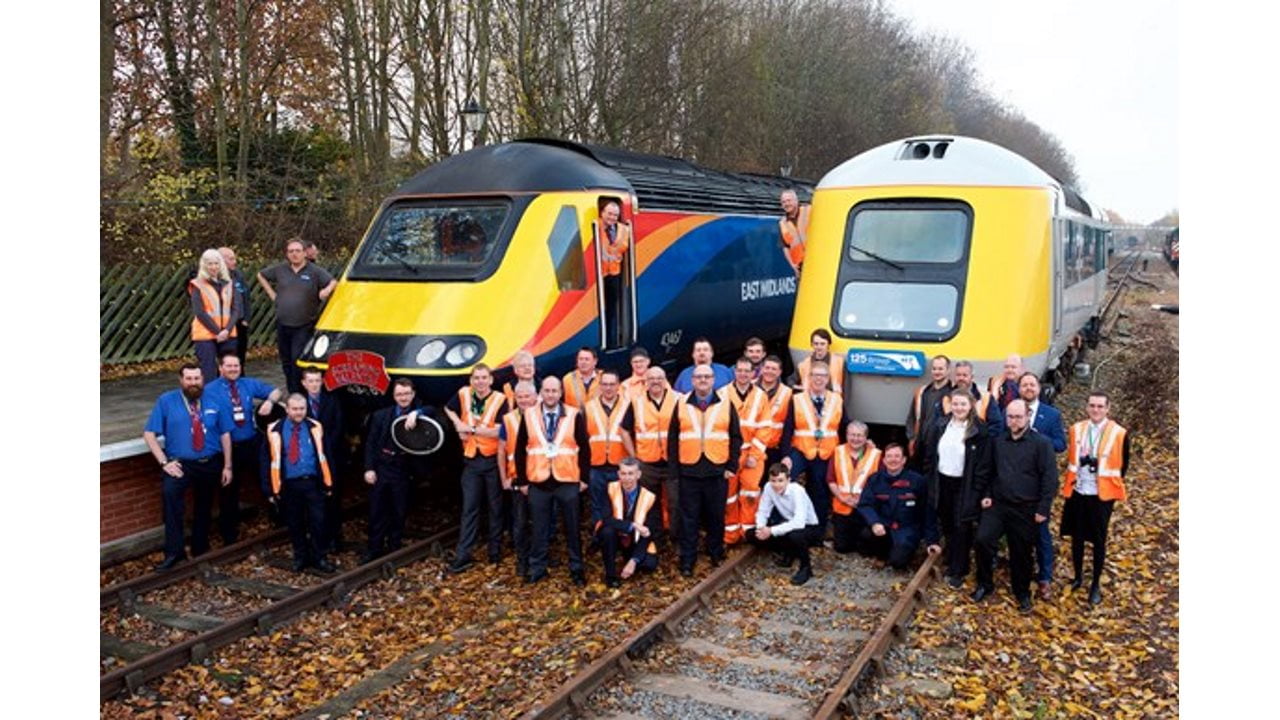 East Midlands Trains has announced that their railtour including 2 Class 43 locomotives and a Class 41 locomotive has raised an incredible amount of money for charity.

On Saturday 17 November, the train operator took one of its newly refurbished ‘Angel’ 2+6 HST sets from Derby to Ruddington on the Great Central Railway, Nottingham. Here, one of the Power Cars was switched for the National Rail Museum’s prototype Power Car ‘41001’.

East Midlands Trains partnered with Branch Line Society as their ticketing agent and 125 Group who are custodians of the HST Prototype, the GCR-N were very open to the idea.

Within eight weeks, all 292 tickets were sold.

Fully crewed by East Midlands Trains volunteers, the tour commenced from Derby and took in a few non-passenger lines for the BLS on route to Loughborough where to tour joined the Great Central Railway – Nottingham.

Upon arrival at Ruddington, Power Car 43467 was removed and 41001 attached. All shunting duties being undertaken by Stagecoach Rail Managing Director, Tim Shoveller.

The original Valenta power unit performed faultlessly as both Leading and Trailing power car for several jaunts along the GCR-N infrastructure, taking in bits of track not normally utilised for passenger services.

When it was time to head back, 43467 was reattached and returned via some interesting Goods Lines and they arrived back at Derby on time.

Having counted up the ticket revenue, raffle, silent auction and other fundraising efforts, the money rose amounted £21,143.21.

“The stars of the show were the cross functional group of willing volunteers who worked tirelessly and seamlessly with colleagues from the Branch Line Society, 125 Group and GCR-N to make this possible.

“The Railtour was a great team building exercise that has also led to a significant social media presence, providing universal praise and enhancing East Midlands Trains reputation within the industry”

“We are immensely and sincerely grateful to all of the volunteers and staff teams from East Midlands Trains, Branch Line Society, Great Central Railway (Nottingham) and Network Rail for their fantastic efforts and support which made this railtour happen.

“Hours of preparation and detailed planning through to hard graft delivering the service on the day, giving up their own time to raise over £21,000 for our 125 Group HST Depot Appeal.  Huge thanks also to those who donated and bid for some very special auction and raffle prizes, and to everyone who bought tickets to ride ‘The Screaming Valentas’.”

” We were honoured and privileged to support East Midlands Trains and 125 Group with this fund raising adventure, where rail enthusiasts from many different aspects of the hobby travelled together to support a very worthy objective.

“The most rewarding part of the whole experience was the great sense of teamwork we achieved, with many organisations working together to give a fantastic experience for the passengers.”

Stirling to London trains to be reinstated