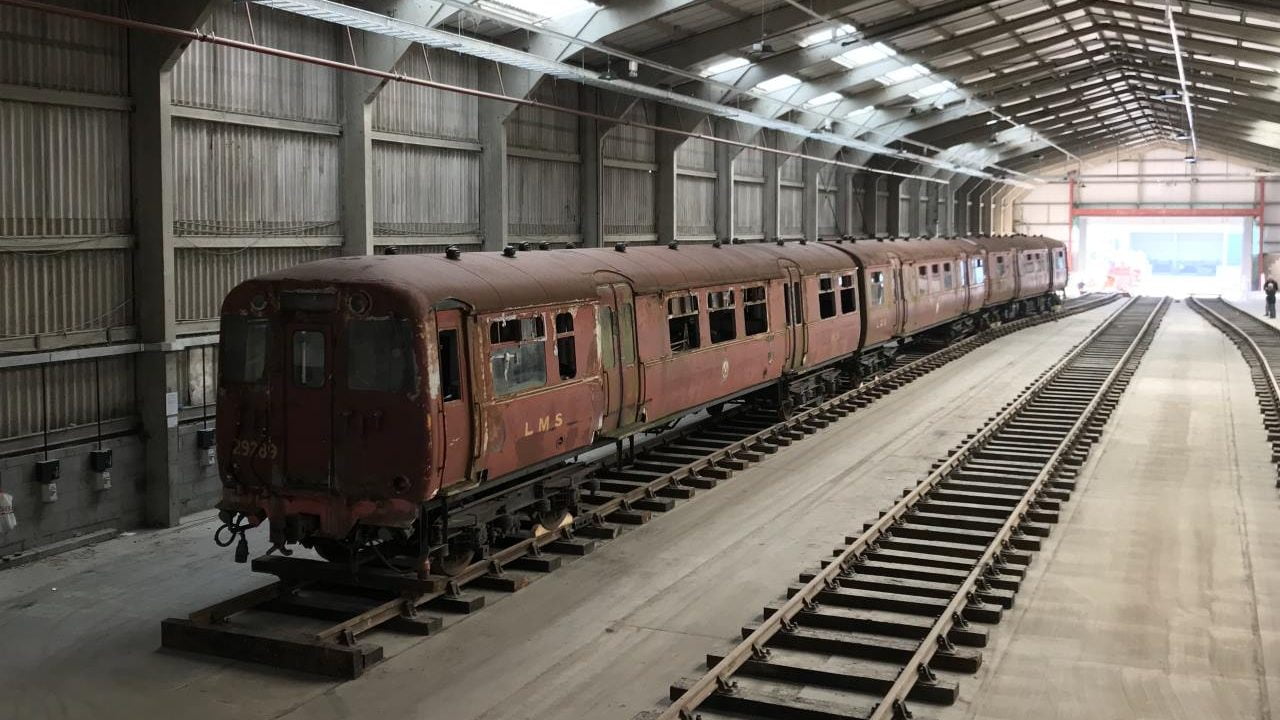 The Heritage Electric Trains Trust has announced that both the 4-SUB unit and Class 503 electric train have arrived at the Locomotive Storage Limited facility in Margate – the former Hornby factory.

These trains are the last survivors of their respective types and represent a major part in the electric railway story.

Planning has taken months for the clearance of the Electric Railway Museum site and the four vehicles of No.4732 will now reside inside a secure shed along with all three coaches of LMS class 503 and a spare EPB trailer car.

All vehicles are becoming part of the trust whilst their restoration is undertaken by Heritage Electric Trains Trust.

The 4-SUB units were produced from 1941 until 1951 when 185 of these trains were built, a large amount of them was built in Lanching using new and recycled underframes. The curved body sides allowed the move from ten to twelve seats per compartment thanks to the additional width. The 4-SUB units found themselves working out of London’s southern terminus’ including Waterloo, Charing Cross, Victoria and London Bridge. The final working for the 4-SUB trains was in 1983 from Victoria to East Croydon, this coincided with the introduction of the Class 455 fleet.

The Class 503 trains were built in two batches. The first batch was built in 1938 by Met-Cam and BRC&W Co., their use was on the newly electrified route between Liverpool Central and the Wirral Peninsular or Rock Ferry via the Mersey Railway but run by the LMS. The second bath was built in 1956 to replace the original Mersey Railway stock. The one preserved today is from the earlier LMS stock, all were withdrawn from traffic in 1985.

Both of these units were saved by British Rail before their classmates were scrapped. The 503 ran up until 1988 on special trains, whilst 4732 operated charter trains with the Southern livery applied. The train often worked alongside the 2-BIL unit, which is now in the National Collection.

Both units have now found their way into preservation. They were stored at the open air Electric Railway Museum in Coventry before that closed.

The total cost for both units over a ten-year timescale is more than £1,000,000 to bring both units up to heritage railway operation. Neither has had an overhaul since the 1980s, that was when Prince William was born and Channel 4 went on air!

The 4-SUB Association, which is a separate support group, has been established to support the work of the HETT in keeping 4732 safe and secure in storage to raise funds to pay for the cost of keeping her there.

Commenting on the 4-SUB’s arrival in Margate, Chairman of the 4-SUB Association Mark Walling said:

“This is a fantastic day for 4732. After many years at an open museum, the opportunity to get her undercover and to kick-start new projects which will assure the long-term future of this historic and important train as a real asset to railway heritage. The 4-SUB Association, still very much in its infancy, has very encouraging membership numbers and 4732 is clearly still very popular in the railway heritage circles in which it sits. Preserving electric trains, most notably full-length multiple units, is remarkably difficult yet this is certainly one of the most rewarding days.”

Nicholas Hair, the coordinator of movements of rolling stock to the new Margate site, also remarked:

“We can’t thank Locomotive Storage Limited enough for their help and assistance. In 4732’s (and the Class 503’s) time of need, it is LSL who
have accepted us with open arms, given us support, stood with us and now we get to see ‘our unit’ sat alongside a train of the calibre of Bittern!”

If you would like to help with the storage costs, which are significant due to the high-quality facilities that Locomotive Storage Ltd have, then you can donate to the group via their JustGiving page. Click here for more information.