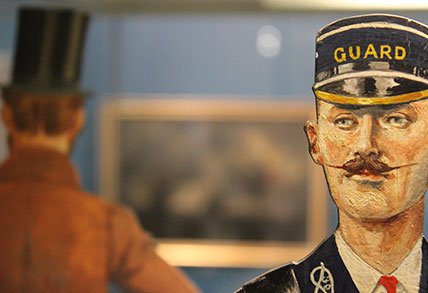 The National Railway Museum has announced its new exhibition of significant items from the national collection. They are being displayed together for the first time.

The new exhibition, called highlights, will be situated overlooking the museums Great Hall and will include paintings, medals, models and other artifacts. The exhibition will showcase over a million items to be seen by visitors.

The recent acquisition going on display is Wallace Oakes’ George Cross medal. This medal was awarded to Wallace after he stayed aboard a burning locomotive to prevent an accident in 1965.

The Highlights exhibition is now open during museum hours (10am–5pm). It is free to enter. The exhibition replaces the moveable feast exhibition.

This exhibition has been made possible through the support of the Friends of the National Railway Museum.

Assistant Director and Head Curator Andrew McLean said: “Although the 260 locomotives and vehicles are the most well-known part of our collection, they make up less than 0.5 percent of the total, which includes everything from paintings, ceramics, signage and signal boxes to coins, furniture, photographs and rare books.”

He added “This exhibition is intended to give people the opportunity to see a different side of the collection and to use paintings and objects to tell new stories about why the railways matter to all of us. Wallace Oakes’s medal, for example, remembers an act of great sacrifice that saved many lives, but it also tells us just how dangerous working on the railways was in the age of steam.”