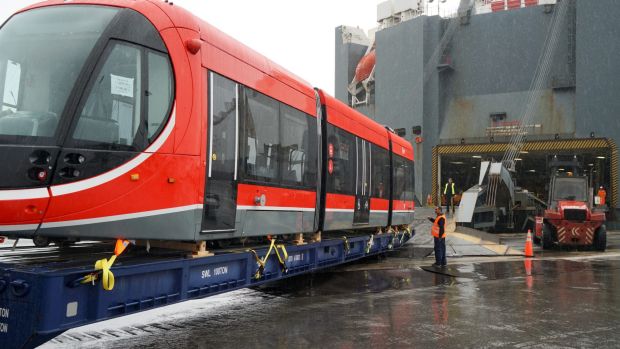 A day after the first tram arrived by lorry into Canberra, Australia, it has been vandalised by graffiti vandals whilst it awaits its unveiling in the coming weeks.

The new tram was shipped over from Spain last month. Though, on Thursday last week, officials confirmed it had been “targeted by graffiti vandals”

The tram is the first of 14 expected to run on the 12-mile line from the city to Gungahlin corridor. The fleet is costing $65million and they are set to come into service in late 2018. Each tram can carry 207 people.

The graffiti was to be removed from the tram on Thursday afternoon.

What did the officials say on the Canberra Trams?

Metro chief executive Glenn Stockton called the vandalism disappointing. He said “Of greater concern is that members of the community have accessed a live construction site, which puts them and others at risk.”

A spokeswoman for Transport Canberra and City Services said the Metro had security controls in place to restrict public access to its construction sites.

Trial runs for steam locomotive 3801 in Australia a success!

FLIRT Trains from Stadler ordered for railway network in Portugal