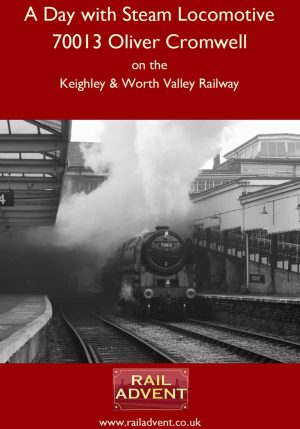 This 4K video features around an hour of footage of the steam locomotive No. 70013 ‘Oliver Cromwell’ on a special charter day on the Keighley & Worth Valley Railway.

The charter day, during March 2018, shows the engine and its goods train at various locations along the line.

We have produced the film in the order that the clips were taken, and it shows well how a charter day works, with the train making multiple passes of each photo point the train stopped at.

This enabled everyone on the train to get plenty of photos and videos from different angles and positions.

As the railway was closed to general passenger traffic, Oliver Cromwell had the run of the line. A number of unusual locations for filming were therefore made available.

You can see the train passing through Mytholmes tunnel, shot from inside the tunnel itself. Plus footage was taken from off the platform in Keighley, on Keighley bank and around Damems Junction and around Haworth Loop, and other lineside locations, not accessible to the public or to lineside permit holders.