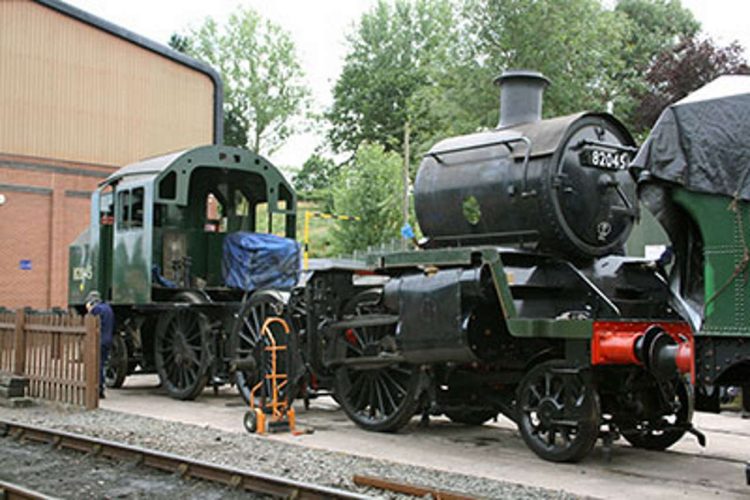 82045 outside the boiler shop with the footplating at the sides of the smokebox temporarily re-fitted. // Credit: The 82045 steam Locomotive Trust

The 82045 Steam Locomotive Trust has released its latest update on progress in building a new member of the extinct Riddles BR 3MT 2-6-2 82000 tank class.

Many of the current new-build projects aim to recreate larger main-line types, but this project is looking to build a loco intended specifically for heritage line use.

Success with this project will also open the door to the recreation of a Riddles 2-6-0 77000 class, another long-lost type that is well suited to service on today’s heritage lines.

The driving force behind the project is the conviction that the days of working steam are numbered without an initiative of this kind.

Since the last progress report in March, machining of the cab window frames has continued.

To aid the positioning of the atomisers and mechanical lubricators together with the associated pipework, the footplating at the sides of the smokebox has been temporarily refitted.

Stay holes continue to be drilled in the firebox, and one side of the outer firebox has had its horizontal joint welded up by the contract-coded welder.

The lifting arms on the ends of the reversing shaft have been fitted. As these are an interference fit with a key incorporated, the process involved lowering the ends of the shaft into a drum of liquid nitrogen to lower the temperature whilst the boss of the arms was heated to increase the size of the bore.

The frozen ends of the shaft were then quickly lowered into the hot bore of the boss of the arms and the temperatures allowed time to normalise.

In the days beforehand, some calculations had been done and whilst heating the boss of the arms the temperature was checked with a heat gun, and the bore checked with pre-set callipers, until it was declared satisfactory to lower the frozen end of the shaft into the arm. The operation was filmed and will be released in due course.

The locomotive has been moved around the yard, as can be seen in the images below: The 82045 Steam Locomotive Trust have published their June 2021 update on constructing their new build steam locomotive,...