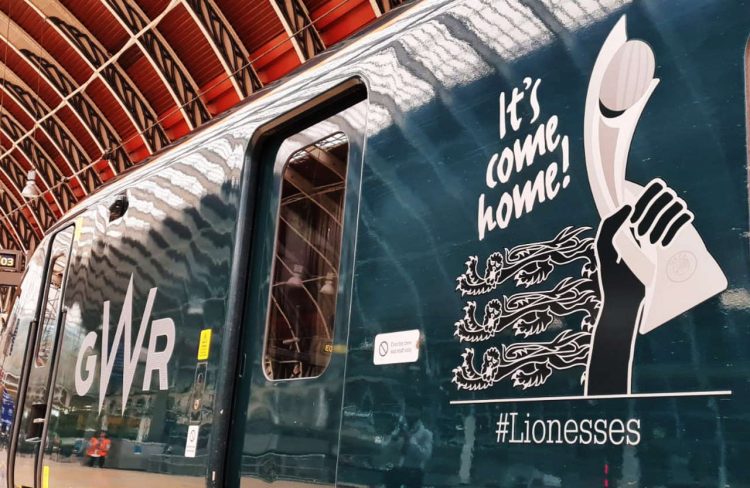 Great Western Railway (GWR) has been quick off the mark in celebrating the England Women’s football success in last night’s Euro 2022 final by adorning Intercity Express Train 800316 with a celebration design.

GWR has provided a lasting tribute to the magnificent Lionesses by giving them pride of place on the side of the train with a vinyl of “It’s come Home” above the three lions and #Lionesses next to a hand grasping the Euro 2022 trophy.

Football came home last night with England’s glorious 2-1 extra-time win over Germany at Wembley. Ella Toone had come off the bench to put England in front just after the hour, only for Germany’s Lina Magull to equalise and send the game into extra-time. However, substitute Chloe Kelly scored a dramatic 110th-minute winner to spark delirious scenes among a record European Championship crowd of 87,192.

In June, GWR added the official Platinum Jubilee Emblem to the side of its Queen Elizabeth II train, 800003, as part of the celebrations to mark Her Majesty’s 70 years on the throne.

GWR Human Resources director Ruth Busby watched the big match with her family last night and was overjoyed by the result. Ruth said: “The Lionesses have captured the hearts of the nation with their performances over the past month and I’m delighted we are celebrating their Euro 2022 triumph on one of our Intercity Express Trains.

“We at GWR have a long and proud history of celebrating Great Westerners – past and present heroes from across our network – and the Lionesses are truly worthy of recognition for bringing football home in such brilliant style.” Wireless technology that monitors the full suite of wheelset and bogie parts is being installed on all of...