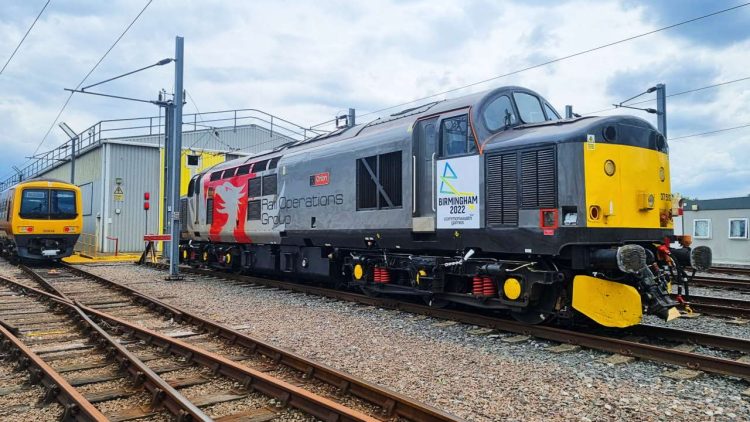 Two locomotives branded with the Commonwealth Games logos have been placed on standby ready to assist broken down passenger and freight trains in the West Midlands during the games.

These locos have been provided by Rail Operations Group, and have been moved from their usual base in Derby to Soho railway depot in Birmingham so they can rapidly respond to rescues should they be needed during the games. Relocating the rescue locos is an initiative by the rail industry to provide the best possible service to passengers during the Commonwealth Games.

Over the last 18 months, extensive work has taken place to get Midlands rail routes in the best possible shape for the games, including major station upgrades at Coventry and Perry Barr, removal of graffiti and overgrown plants and trees from beside tracks, training of hundreds of station volunteers, and upgrading railway lines and equipment so they are reliable for passengers and freight.

The Thunderbirds played a vital role in the recent record-breaking temperatures, helping to move trains that became stranded when overhead power lines suffered heat-related damage in Birmingham. The Class 37 locomotives were built in the early 1960s and have been heavily modernised and fitted with bespoke equipment to rescue stranded trains. Outside of their standby duties for the Commonwealth Games, they are used to move new trains around the network for testing, move existing fleets for maintenance, and transport old trains when being taken out of use.

Denise Wetton, Network Rail’s Central route director, said: “We hope they’re not needed during the Commonwealth Games but having these locos based in Birmingham means we will able to remove stranded trains much more quickly and get passengers moving again.

“As an industry, years of planning has gone into being Games ready and we will continue to monitor the railway 24 hours a day throughout the major event to react and resolve any issues. As always, if you are planning on travelling during the Games please plan your journey, check before you travel and allow extra time.”

Dave Burley, chief operating officer for Rail Operations Group, said: “We are proud to play a part in the preparation and support for the Commonwealth Games. These locos play a key role in the national railway and it’s fitting they are branded and ready to be called into action if needed during one of the biggest sporting events in the world.” Next month the Branch Line Society is running a two-day loco hauled rail tour of Northwest England to...