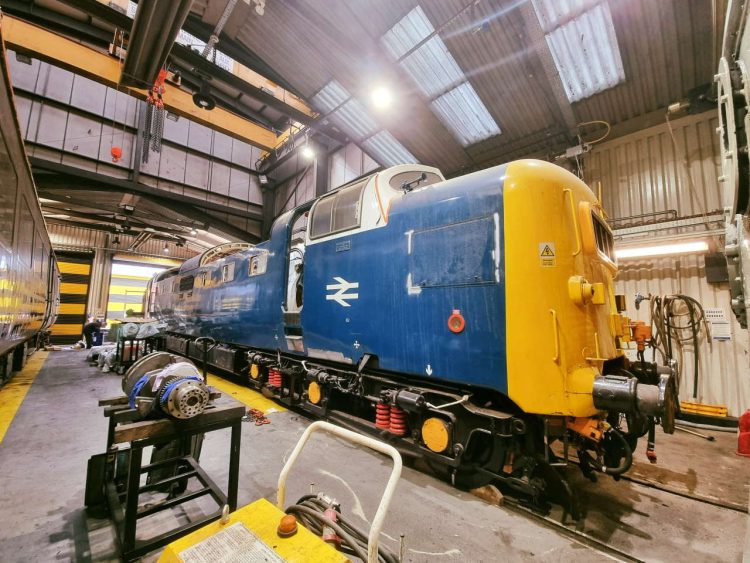 Locomotive Services Group has issued a statement regarding the planned participation of Class 55 Deltic No. D9000 Royal Scots Grey in the Deltic Delight rail tour on Friday, 26th August.

The locomotive is in the final stages of its overhaul, and the aim is for this to be completed by 26th August.

The project is working hard to achieve that aim, but achieving it requires everything to go as planned. Whilst there is little reason to think it won’t, if the worst happens it will be too close to the 26th to avoid a late cancellation and a group of unhappy customers (and engineers).

If D9000 was not available the group would not substitute an alternate locomotive, so after much debate it has been decided that even though completion is close, all the efforts put in would be wasted if the target date of 26th was missed. Although the group would prefer to be in a better position, the reality is that they cannot say with absolute certainty that running the tour on the 26th is achievable.

Although some passengers may have other commitments on the revised date, it is hoped that many will still be able to join the tour. It also means that the Deltic Delight will be D9000’s first operation under the group’s ownership, and will be followed by two further trips in October already advertised.

During the rebuild of Royal Scots Grey there have been several unforeseen problems. The group realises that some Deltic tours which Intercity customers have paid to travel on have been rescheduled, but their wish is for D9000 to be back on the mainline as soon as possible. From an owner’s perspective it is also vitally important that it is in the right condition when it is sent out onto the national network, as if it suffers a major failure because the locomotive was not ready, there would be many unforeseen consequences.

This has been a hard decision to reach but is believed to be the right one. Refurbishing any locomotive is tough, and Royal Scots Grey has been no exception. The hope is that everyone interested in the locomotive will understand the decision, even if they are somewhat frustrated by it. Regular updates will be posted on the group’s Facebook page.