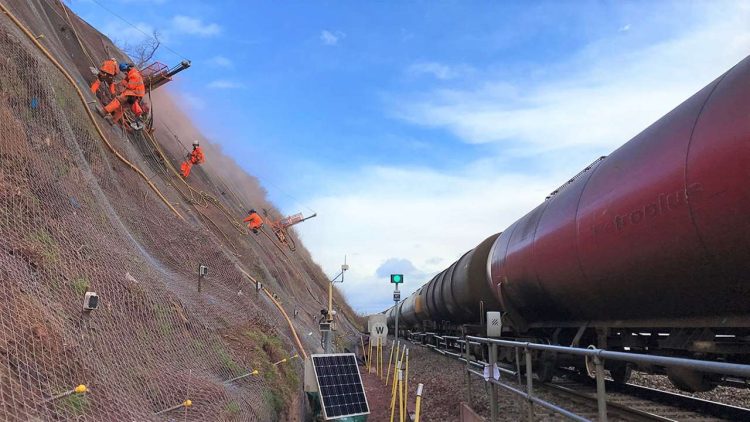 The Newport to Gloucester line has been troubled with landslips over recent years seeing five major incidents recorded from 2020 to 2021 alone and causing extended closures, temporary speed restrictions, and delaying over 200,000 trains. Network Rail’s programme of resilience work has been specifically designed to protect the line from extreme-weather landslips caused by climate change.

The project will see over 30,000 tonnes of material removed from the cliff face ahead of 27,000 square metres of mesh being put in place along three miles of track. The mesh will stabilise the cliff face, preventing further landslips from affecting the track beneath.

In order to complete this essential work safely, the railway will see a temporary closure between Lydney and Gloucester for a period of seven weeks from 07:00 on Monday the 18th of July through to 06:00 on Saturday the 3rd of September. Throughout the closures, buses will replace trains as follows:

During the first two weeks of work, the temporary closure will also include up to Severn Tunnel Junction, which will allow essential track renewal work to be carried out near Chepstow from Monday the 18th of July until Saturday the 30th of July.

The majority of the work is set to take place during the school holidays in order for students who rely on the line to get to school not to experience disruption.

“We’re already seeing the extreme effect climate change is having on our weather – with coastal and more exposed parts of the railway being heavily impacted. Keeping the railway safe is our number one priority and we’re also striving to secure the future of vital rail links, like this, in Wales and the Borders.”

“I recognise there’s never an ideal time to close the railway, but we’ve done everything we can to minimise disruption for passengers and freight services while we carry out this work, which will make passengers’ journey much more reliable in the future.”

Engineering contractors, Taziker, have won the contract for the project and will work alongside Network Rail.

“We’re extremely proud to be partnering up with Network Rail on this project.

“Our expert teams have created a system of works that will not only protect the line for passengers from future landslips, but also protect the local community and environment while the work is undertaken using green energy supplies, investing in the local economy and minimising disruption where possible.”

In order to cut carbon emissions and noise pollution, Taziker will use 100% solar-powered generators on-site to power welfare units, office cabins and lighting. Money is also being invested back into the local economy, as 70 personnel on shift each day will have their lunch provided by Lydney-based ‘Joshua’s Catering Company.’

Passengers are advised to check their travel plans ahead this summer using http://nationalrail.co.uk.