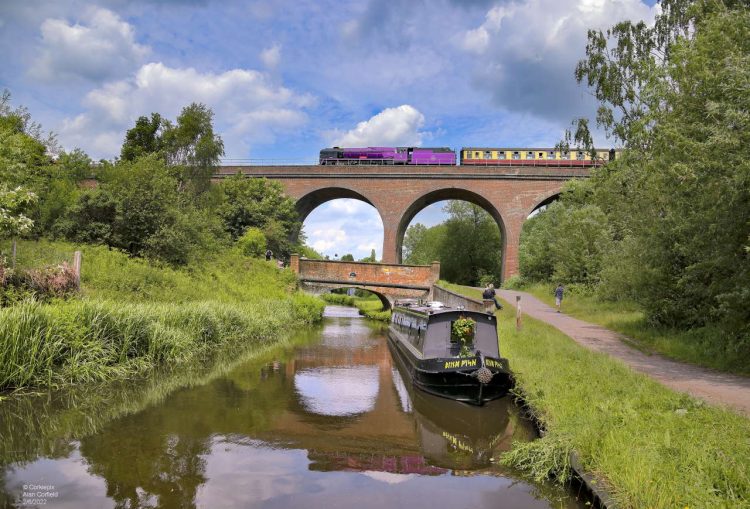 The Severn Valley Railway has been carefully planning its part in the Birmingham 2022 Commonwealth Games.

On Saturday 23rd July, the heritage railway will hold the Queen’s Baton Relay, taking it 16 miles from Kidderminster to Bridgnorth. There will be 6 Batonbearers on the train with each responsible for carrying the Baton through the carriages

Alongside carrying the baton, the Severn Valley Railway will have a special service from Kidderminster. Their purple steam locomotive No. 70 ‘Elizabeth II’ will haul the service at 10:07. In a public ballot, free tickets to travel on the train have been allocated as well as viewing places at Kidderminster station.

Additionally, members of the public are invited to view the Relay train at the stations in between (Bewdley, Arley, Highley, Hampton Loade, and Bridgnorth). Although the public should be aware that the places are limited and are first come first serve. When passing through each station, the train will travel through at a slow pace and sound its whistle. Stations such as Arley, Highley, and Hampton Loade will have no parking available, so viewers will have to walk to the stations.

Once the Baton has completed the 16-mile line, they will carry it into town for a trip on the Cliff Railway.

Richard Riley, who is a retired teacher, will be one of the Batonbearers on the train. He was chosen for his contributions as Ambassador for both Ovacome and Primrose Hospice. Ovacome is an ovarian cancer charity he became involved in after his wife Maxine, unfortunately, passed from the disease.

The timetable for Saturday is available at svr.co.uk, and normal services will resume later in the morning.

“It is a huge accolade to have been selected to host this high profile section of the Queen’s Baton Relay,” said the SVR’s managing director Helen Smith. “We’ll be putting on a guard of honour at both Kidderminster and Bridgnorth stations, made up of some our 1,600+ volunteers. This is going to be a proud day for the SVR, and we’re delighted that our stunning purple-liveried locomotive will be one of the stars, along with the Batonbearers on board our train.”

Richard Riley said: “I know Maxine would have been hugely proud of my involvement with the Queen’s Baton Relay, and would have been making sure I get everything absolutely right. I’m thrilled to have been chosen, and the fact that I get to travel on this special train is wonderful. I’ll be getting plenty of photographs next to the amazing purple loco!”

Update on overhaul of steam locomotive 16440 at Midland Railway – Butterley